In addition to the monthly 50 years of Doctor Who DVD reviews, I will occasionally throw in a review on New Releases as they become available of which this is one…

Doctor Who: The Reign of Terror  Story No. 8
Directed by Henric Hirsch
Written by Dennis Spooner 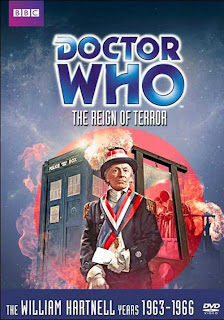 “The events will happen, just as they are written.  I’m afraid so, and we can’t stem the tide.  But at least we can stop being carried away with the flood!”

In an attempt to return schoolteachers Ian and Barbara back to 1963 England, the Doctor accidentally lands the Tardis in 18th century France in the middle of one of the bloodiest periods of the French revolution.  The Doctor and his companions, Susan, Ian, and Barbara are soon separated, and must use all their guile, cunning, and knowledge of history to reunite with each other and get back to the Tardis, while at the same time avoiding a date with Madame Guillotine!

The Reign of Terror is the second “incomplete” story after Patrick Troughton’s The Invasion, to be released on DVD with animated reconstructions of its two missing episodes.  Is it successful?  To be sure, even to spite the apparent budgetary limitations that required the re-use of a great many animated sequences, as well as some quite frankly odd stylistic choices that include some very modern looking quick back and forth “MTV” style cuts, ultra close ups and animated foreground objects that are far beyond what would have been seen on the programme as it originally existed.  Overall however it is wonderful to have this story complete for viewing after all these years. 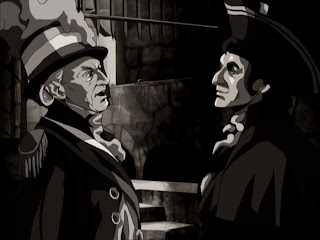 As was usual at the time of shooting, the Doctor Who production team was booted out of BBC Television Centre, so the fantastic sets needed for the story had to be constructed in the short, narrow space of Limegrove Studios.  This forced the set designers to be extra creative to be able to fit the rather ambitious set pieces into the unusually shaped studio.  Limegrove Studios was disliked not only for its odd shape, and the difficulties that came with building sets and shooting there, but also that the studio lights tended to heat the space up so much that the emergency sprinklers would go off causing delays in shooting.

The picture and sound are fairly decent considering the nearly 50-year-old source material.  Once again props to the hard work put in by the Doctor Who Restoration Team in making this story look as good as it does.

Extras are a little thin on this release, possibly due to the expense in producing the animated episodes, but it does include audio commentaries on all episodes, with Carole Ann Ford (Susan), Neville Smith (D’Argenson), Jeffry Wickham (Webster), Caroline Hunt (Danielle), Patrick Marley (Soldier), and the Production Assistant Tim Combe across episodes 1,2,3, and 6.  A commentary on animated episode 4 by actor Ronald Pickup (Physician), and lastly a commentary on animated episode 5 by “Missing Episode Hunters” Phillip Morris, and Paul Vanezis.  A 25 min making of documentary is also included, as well as the usual PDF materials and a “Coming Soon” trailer for The Ark in Space Special Edition coming to region 1 in March.  Curiously absent from the release is any kind of substantive documentary on the animated segments.  I would have liked very much to see interviews with the animators, information about the company involved and perhaps an overview of the process from concept drawings to finished product.  Unfortunately all we get are a couple of far too brief (2 and 3 minute respectively) virtual set tour, and animation design gallery featurettes that merely whet the appetite for a more complete documentary.

Doctor Who: The Reign of Terror is a decent release that’s thin on extras, but its always awesome to get a previously incomplete serial released.  I tend to think that further animated reconstructions of incomplete stories may be dependant on the success of releases such as this one, so if you are a fan of Doctor Who, be sure and pick it up.  The Reign of Terror gets 3.5 guillotined heads out of 5.