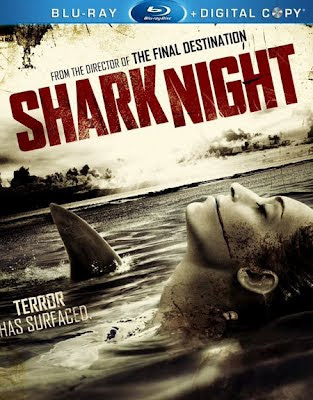 A group of six pretty college friends get more than they bargained for when they go on a trip to a lake house on the Louisiana bayou. That’s right, it’s sharks… Sharks in a Lake! With a concept like this I was expecting the next Piranha 3-D, boy was I wrong.

From its opening credits that includes an awesome montage of underwater shark footage, (and bizarrely enough, a shot from Warner’s Deep Blue Sea!) one would expect an awesome, gory, cheese-fest of epic proportions. What one gets however is a limp, boring-ass, PG-13 “horror” flick containing almost no blood, gore, or nudity, in other words the only thing about it that’s “epic” is the degree in which it fails. But the lack of horror elements wouldn’t be so bad if the flick didn’t take itself so damned seriously, so sly smiles, no self referential winks at the audience. One would think that a movie with the title, Shark Night 3-D would have at least some tongue and cheek humor in it, but no the flick forgoes the over-the-top gore, nudity, and hilarity that made Piranha 3-D such a success, and instead fills it with flaccid, poorly realized characters reacting to one lazily-written situation after the next until the inevitably unsatisfying climax comes, thankfully only 90mins later.

But for all the absurdity of its premise, and even the outright wackiness of some of the shark attacks, the film never gets beyond “just mediocre” so really what’s the point? It fails to be terrifying, it fails to be titillating, it’s absolutely not funny, and oh yeah the combination of CGI and animatronics effects fail epically to convince. What a disappointment…

Yet all of this may have been forgiven if the studio had delivered an unrated 3-D version of the flick. Unfortunately Fox’s Blu-ray release is in 2-D so even the cheesiness of the stuff flying off the screen and into your grill is lost. The AVC encoded 1080p presentation is hit and miss, with some slight banding and digital noise in places. Overall a mediocre video presentation for a mediocre flick.

The DTS HD MA 5.1 audio presentation is decent enough, but like the video, never even tries to go beyond average.

Speaking of average, the special features and extras are almost non-existent, the only one of note being: Shark Attack! Kill Machine! A featurette that includes all the shark attacks strung together. Honestly, if you have to give it a rent, just watch this bit and don’t even bother with the movie.

Overall, the flick isn’t completely terrible, and the actors do their best with what they’re given, it just never goes above or beyond second-rate. The terror is not terrifying, the humor is non-existent, and the story… well it might have been a decent first draft…