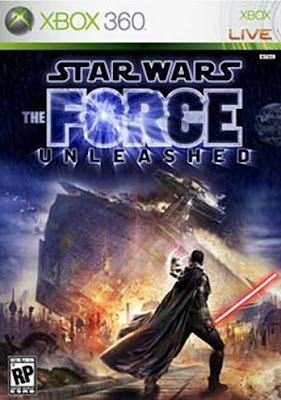 The Force Unleashed was one of the most anticipated titles of the year, and after being delayed no less than twice, finally made it to stores September 16th. The game follows the untold story of Darth Vader’s Secret Apprentice, “Starkiller” as he tracks down the last of the Jedi in between movie episodes III, and IV.

The overall story is very good with just enough twists and turns to keep one interested right to the closing credits. In fact I will go as far to say the game’s storyline is not only better than the Clone Wars theatrical release, but also head and tail above the entire Prequel Trilogy as a whole. But maybe I’m biased. I always enjoyed the so-called “Classis Trilogy” era of the saga more because I grew up with it and this game has a definite “used galaxy” look and feel to it that the Prequel Trilogy lacked. I don’t want to go off on a rant here, but imagine the kind of animated flick Star Wars fans could have got if George would have thrown fat “Ratatouille” like cash at Lucas Animation and told them to make a slick, realistically styled CG movie based on the story of The Force Unleashed… but I digest. The voice acting is good all around, and Sam Witwer gives an exceptionally strong performance as Starkiller, and any game that feature Jimmy Freakin’ Smits can’t be all that bad, can it?

Which brings me to the game play; it’s mediocre at best, and downright annoying at its worst, although to be fair, I did have only one “controller throwing moment.” In The Force unleashed the camera is NEVER your friend. Ever. Many times even sticking you in spots where you cannot see, or figure out where the hell you are, or what the hell is attacking you. The battle with Vader near the end gives you crappy stationary camera with only one crappy angle making it almost (but obviously not quite) impossible to launch the attacks you need to uses to defeat him. Then there are the Real Time Events… ung… following the annoying industry trend, The Force Unleashed has many, many, many, many RTE’s in which you are prompted to press (on the XBOX 360 of which this review is based) X, then B, then Y, then A, etc, etc, to create a Pre-Rendered finishing move. I hate RTE’s in games because they take the game play out of my hands, instead of defeating a Boss the way I want to, I get stuck with something the game designers think “looks cool.” While sometimes they do, there are so few of these animations in the game that if you’ve watched it once, you’ve pretty much seen it all.

To its credit, the game looks and sounds awesome, but for all they hype and all they waiting this game put me through, I was a little disappointed that it never aspired to be anything more than a standard “hack ‘n slash” game with Force powers. The Force powers in the game, as awesome as they are, (and they are wicked cool believe you me, thanks in part to naturalmotion's Euphoria engine) still cannot save this game from being any more that just mediocre.

Three screaming Stormtroopers out of Five.

But, if I were to review the story separately from the game play, it would have gotten a Five, proving once again no matter how much game development studios poo-poo the thought of hiring good writers for games, a good story is still a very important element in the overall gaming experience. Lucasarts has bucked the industry trend with this game delivering a great story, with less than stellar game play.
at September 22, 2008 No comments: