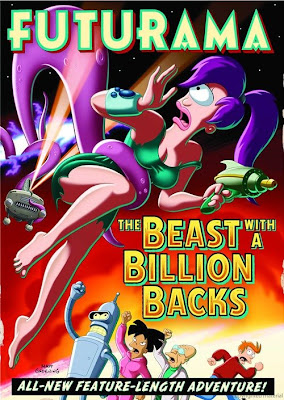 Futurama: The Beast With A Billion Backs
Directed by David X. Cohen

All right, the second of four new Futurama direct to DVD features begins some six months after the events in Bender’s Big Score. Mankind cowers in terror at a searing rend in space/time that looms menacingly over the Earth…

Futurama is my favorite series ever. Over its four seasons it proved to be funny, and clever, and able to bring its audience from gut-aching hilarity to tears in just seconds (“Jurassic Bark” I’m looking at you!) It’s tough sometimes to be completely objective when I’ve been such a passionate fan for years, but here goes.

The Beast With A Billion Backs is a satisfying tale, yet when compared to some of the best stories in the series, it comes off as just a little better than mediocre. There are some good twists and turns, The League of Robots is super cool, and Bender as a Pirate is just plain awesome.

The Beast With A Billion Backs is presented in a slick, clean 1.78:1 anamorphic aspect ratio that, to be perfectly honest makes one wonder why they didn’t shoot the WHOLE SERIES like this. The Dolby Digital 5.1 soundtrack was passable, but nothing extraordinary. Where these Futurama DVDs really shine is in the special features. This disc includes a hilarious commentary track with creators Matt Groening and David X. Cohen, actors Billy West, DiMaggio, Maurice LaMarche, co-writer Michael Rowe, director Peter Avanzino, and producers Claudia Katz and Lee Supercinsk, The Lost Adventure, which is all the cut scenes from the XBOX Futurama game that came out a few years back, as well as animatics, deleted scenes, bloopers, 3-D models, A Brief History of Deathball, and more.

Fans of the series rejoice, Futurama is not dead yet, and hopefully if the rest of these DVDs do well, we will be treated to many more adventures in the future.

Those who know me know I’ve been a Sony honk for more than two decades now and have spent much more than my share of good money on Sony electronics and other consumer products. This is why it pains me to say that I might just be freaking DONE with them!

My latest purchase back in March was the BDP S500 Blu-ray Disc player. For the first three months it worked perfectly. The picture quality is awesome, the sound equally so, and the up-conversion makes regular DVDs look beautiful.

Then about ninety days in little things started happening. Little things like the player freezing up during the playback of DVDs and BDs. At first I thought it was because of dirty discs, but upon checking, I found them to be without dust, or smear.

I called tech support and they claimed it MUST be the discs. So I thought maybe they are right… it could be something like that, who the fuck knows right?

A couple of months passed and the player was free from defects… then last month a new problem cropped up. Some discs were refusing to play. After the laborious five minute boot up the S500 makes me wait through, (I was in the habit of turning on the machine, going to grab a beer and snacks, before the disc try even opens, then putting in the disc, vacuuming the floors, or raking the lawn, or doing the dishes before the disc finally spooled up) the front loaded trailers and ads would play, then the main menu screen would pop up. Only there was no cursor on the screen, and there was nothing I could do except to power down the player, not from the remote, but the power button on the unit itself, wait five minutes and try again. Usually the second time it worked. Then the random freezing began again, and I have HAD IT! And before anybody shoots their mouths off about it, YES I have applied all necessary firmware updates and it seems to make absolutely no difference to the way the player functions, boot up and load times are still ridiculous, the player is still frequently buggy.

For what this unit cost it is the WORST piece of equipment I have ever had the displeasure of fighting with. And I shouldn’t have to fight with it. It’s not like I bought a POS Sampo or Curtis discount BD player at a fucking Wal-Mart!

Anyway, I am taking this POS back to the Sony store on Saturday and we shall see where the cookie crumbles from there…
at October 03, 2008 No comments: