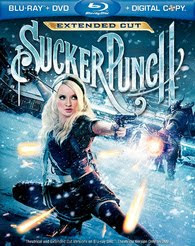 A teenage girl is locked away in a mental asylum by her abusive stepfather where she is scheduled to be lobotomized. Seconds before her “treatment,” she retreats to a fantastical world in her imagination where she and four other female inmates plot to escape the facility. The lines between reality and fantasy blur as Baby Doll and her four companions, as well their guide, fight through a series of fetch quests to retrieve the items they need that will allow them to break free from their captors before its too late...

Many reviewers all over the interwebs have tried to use this flick as some kind of so-called “proof” that Zack Snyder is some kind of misogynist that doesn’t understand or care for women. To these people I say you missed the point of Sucker Punch even more than Michael Bay missed the point when he made Pearl Harbor. The flick is about an imaginative girl’s escape from a cruel and nasty world, filled with horror and betrayal by the very people who should be taking care of her. A world not unlike our own, when sometimes the bad guys win. She escapes into the only place she can; her imagination, the only place where she can control the world around her, and ultimately her destiny to become the hero she couldn’t be in the real world, all within the few moments of lucidity she has remaining before being lobotomized. The film is NOT about “rape” or “hatred of women” as some other reviewers have stated, and I invite them to pull their politically correct heads out of their asses and grow the hell up before making such inflammatory and downright ridiculous statements.

The action sequences absurd in their awesomeness and remain some of the strongest, visually arresting, and impressive scenes in any film from the last ten years and are without a doubt the highlight of the film. But therein lies the problem, after the first fantastic sequence with the Giant Samurai, I found myself uninterested in the scenes in between, as nothing else in the film is anywhere near as interesting as “fantasy within a fantasy” action scenes! Not that it’s a bad film, its just a little scattered and uneven, seemingly unaware of what kind of flick it wants to be; a kick ass girl power flick, or a commentary on the horrors of 1960’s institutional cruelty and the loss of "the self." I'm not saying it can't be both, but it can be a bit disconcerting when a movie is marketed so heavily as one thing, and the product on screen turns out to be something very different indeed.

The biggest problem with the film lies in its wholly unsatisfying and unnecessary first layer of fantasy that turns the asylum into some kind of absurdist, surrealistic cabaret theater/ brothel. I understand what director Zack Snyder was trying to do, in that these scenes are supposed to be a bridging point between the real world, and the second layer of fantasy represented by the action sequences, but ultimately it just doesn’t work and feels on the whole superfluous. If I was directing the flick I would have eliminated the first fantasy world altogether in favor of an extended real world sequence in which the character beats are longer, eventually transitioning into the fantasy action sequences one after another, then back to the real world for the big finale.

The blu-ray, on top of a fantastic looking MPEG-4 AVC transfer in 1080p and a downright outstanding DTS-MA 5.1 surround track, contains yet another fantastic Maximum Movie Mode hosted by Director Zack Snyder that takes a deep and satisfying look into the making of the film. This for me is the highlight of the blu-ray and I recommend watching it even if you didn’t enjoy the flick upon first viewing.

All in all Sucker Punch is a great concept clumsily executed, and for that reason can only get THREE Giant Samurai out of FIVE. 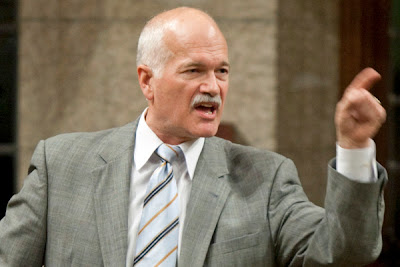 Yes, that’s right Chilled Monkey Brainz is BACK from Summer Hiatus and ready to kick its two readers in the nads with more Flick, Blu, and Game Reviews, and all the Politically Incorrect ranting you’ve come to know and hate!

Friends, Marxists, Countrymen, lend me your ears. I’ve come to bury Jack Layton, not to praise him.

First and foremost let me say to all of Mr. Layton family and close friends, I’m sorry for your loss. Jack’s death certainly shocked me, and I am neither a friend nor relative, I never liked his politics, but I could certainly appreciate the cult of personality that followed him around during his long career as a politician.

Jack Layton was born in 1950 to a life of wealth and privilege in an affluent Montreal neighborhood, the son of a Progressive Conservative Cabinet Minister. From a young age he showed a distinct aversion to work, remaining a student well into his early adulthood, before taking a teaching job at Ryerson University.

When teaching at a University level proved to be a lot more work for a lot less money than Jack had anticipated, he sought out a life in politics getting elected to the Toronto City Council in 1982, thus beginning what would become a long career as what I like to call a taker.

He certainly knew how to work the system, and milked it and Canadian Taxpayers for all they were worth beginning in 1990 when he lived with his second wife in subsidized housing paying a mere $800 a month for a luxurious three bedroom apartment while hauling in a combined income of over $120,000 a year.

After losing mayoral election in Toronto in 1991, he returned to his first love; academia before running for and winning the leadership of Canada’s National Socialist Party in 2003. He refused to run in a by-election to legitimize the FAT cheque he was taking from the taxpayers, but certainly got his face out on the CBC, which took an immediate liking to the charismatic, career politician. In the 2004 federal election, Layton ran in his home riding of Toronto-Danforth against Liberal Dennis Mills. His safe bet to win a seat paid off, and he easily defeated the Liberal incumbent.

On March 21, 2011 Layton helped defeat the Government, going against his word and voting for, instead of against a motion of no-confidence in the House of Parliament, helping to stab Canadians in the back and forcing yet another un-wanted election. During the campaign Layton proved to be no friend of Alberta, and by extension no friend of Canada when he told Quebecers if elected he would “shut down the oil industry” in Canada, and “raise taxes on the rich” to pay for the massive social programs outlined in the NDP’s “orange book.” The gamble in Quebec paid off on the May 2, 2011 election, as Layton led the NDP to 103 seats, enough to make the NDP the Official Opposition in the House of Commons for the first time ever, and completely obliterating the Separatist Bloc-Quebequois in the process. So it wasn’t all bad.

On July 25, 2011 Jack Layton announced he was stepping down from the post of leader of He Majesty’s Loyal Opposition to fight an unspecified, newly diagnosed cancer, hoping to return as leader of the NDP upon the resumption of the House of Commons on September 19, 2011. Layton then parachuted NDP caucus chair Nycole Turmel into the position of interim leader during his leave of absence.

Within days of his death on August 22, 2011 Prime Minister Stephen Harper made the unprecedented and wholly bizarre decision to give Layton a state funeral, an honor that had been previously reserved only for former Prime Ministers, Governor Generals, and cabinet ministers who die while in office. Even in death Jack Layton continues to pick the pockets of the people of Canada.

Which brings me back to my original point: Jack Layton was a taker, because in the end all politicians are takers. They pick our pockets and give nothing back to society, culturally, or artistically from the second they get into power, until the time we kick them out. And before you start whining about “oh, but politicians are Public Servants, the work for us!” First, the vast majority of politicians haven’t done a day of real work in their lives, and second, maybe sixty or a hundred years ago politicians served those that voted them into power, but not anymore. In the real world of the twenty-first century the only reason anyone seeks election at any level of government, be it municipal, provincial, or federal in so they can get the chance to take, with impunity, every cent they can from the pockets of the Canadian taxpayer until such a time when they are caught and kicked out of office. If you believe any different, you should remove those rose coloured spectacles from your face and wake the fuck up.

Politicians view the taxpayers of Canada as nothing more than an open wallet that exists for no other reason than to provide them with money, position, power, fat expense accounts, and ultimately (if they are able to stick around for at least one term) a million dollar golden parachute in the form of a huge unrealistic pension. A massive liability, by the way, that the Canadian taxpayers can no longer afford to keep shelling out for.

Unless of course we are all fine with ending up like the Socialist Nations of Greece, Spain, Italy, and Portugal…