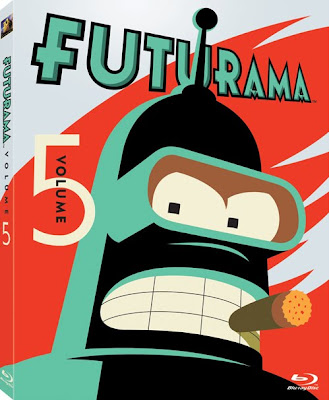 Back By Popular Harassment!

Futurama Vol. 5 on blu-ray is a good, not great collection of thirteen episodes from the newly un-cancelled series, first broadcast on Comedy Central in USAmerica. Highlights include “The Late Philip J. Fry” where the Professor invents a one-way time machine that transports Fry, bender and himself farther into the future than anyone has ever travelled with no hope of ever returning to the past, and “Lrrreconcilable Ndndifferences” that has alien leader Lrrr facing a mid-life crisis after yet another bungled invasion of Earth.

There are certainly no Emmy Award winning episodes in Futurama Vol. 5, such as season four’s “Jurassic Bark,” among the bunch and therein lies the problem. Matt Groening, and David X. Cohen presumably KNEW the show was coming back for over a year, and this was the best they could come up with? One would think that with the extra prep time involved, as well as the hacking down of the season to a mere thirteen episodes we would have been given something freaking spectacular! Alas, what we end up with is more or less just okay. It certainly doesn’t suck, far from it, but it doesn’t stop me from wondering if this was the best they could do, then why bother to come back at all?

The PQ and AQ on the other hand are simply awesome. The 1080p AVC encoded transfer is gorgeous making the animation freaking POP like never before, and the 5.1 DTS-HD Master Audio does its job well and doesn’t disappoint.

The collection of extras on the two-disc set isn’t nearly as sizeable as one would hope after such a long hiatus, but is decent enough. The highlights being the thirteen full-length audio commentaries, and the original video comic book “The Adventures of Delivery-Boy Man” scribbled and performed by Philip J. Fry.

In the final analysis, Futurama Vol. 5 is a welcome blu-ray release that includes a beautiful 1080p transfer and exceptional sound even if it is a bit lacking in the extras department, and the flimsy-ass cardboard packaging sucks donkey balls.

Futurama Vol. 5 gets Three cigar chomping Benders out of Five.
at April 19, 2011 No comments: 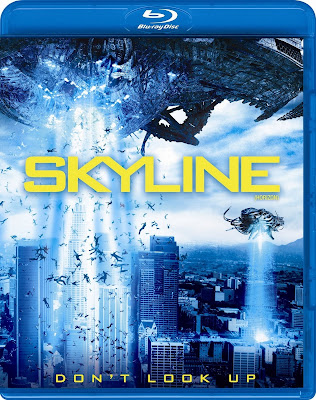 Another Brutally Honest Flick Review By The Jaeger.

Directed by The Brothers Strause

Yes, yes, yes, so do I, so does everybody, in fact nearly everyone I know hates L.A. even people who live there. So if you thought seeing it destroyed would give great satisfaction, you would be wrong.

A simple birthday weekend for a rich yuppie and his friends goes horribly wrong as sunrise comes two hours early in the form of a fleet of alien invaders using pretty blue lights to entice humankind to their doom! As the alien ships descend on Los Angeles, sucking people into their ships as they go, the rich yuppies must use all the survival instincts they have to elude the aliens and survive the apocalypse.

What happens when a couple of visual effects artists who are completely clueless about tone, pacing, dialog, and story decide to make a low budget sci-fi flick? Well you get Skyline of course! A flick where the characters are so flat, so one dimensional, so utterly boring and without personality that seconds in to the flick I found myself desperately yearning for their demise. It’s a shame really because the visual effects, and the alien design elements are really quite striking, but as I have said MANY times before, visual effects do not a great picture make.

Thank dog it only stole 92 minutes of my time. I suppose I should have listened to those alarm bells that went off in my head when the quote on the back of the blu-ray case read: “From the visual effects masterminds behind Avatar, Iron Man 2, and 300!” Lucky for me I borrowed this flick from a friend, as I would never be able to forgive myself if I bought it sight unseen.

The Alliance blu-ray presentation of Skyline is a fairly decent 1080p MPEG 4 AVC encode with strong colours, and skin-tones, but black levels don’t fare as well however coming through rather soft and muted most times. The audio is an ass kicking 5.1 DTS HD MA presentation that will quite possibly blow your roof off if turned up too loud, it’s not perfect, but it gets the job done.

For all the positives of the visual effects, and the decent High Def video and audio presentation, Skyline still warrants nothing more than a 1 out of 5. Rent at own risk, you have been warned.