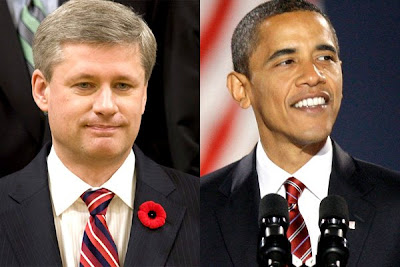 Yesterday the Toronto Illiterati and the Ottawa Press Gallery were buzzing, vibrating, and creaming themselves with joyous anticipation of their Lord God Barack Hussein Obama’s visit to Canada, presumably because in Liberal Central Canada the general consensus is that President Obama is the Savior of the world, and quite possibly the Universe.

These are the very same socialists that whines incessantly about how Canada was becoming “too friendly” with the United States during their last administration. Of course now these same folks are saying we “must be closer” with the USA because it is their skewed perception that the current Canadian government isn’t nearly as far up Obama’s ass as they could be.

Guess what guys, it’s the SAME COUNTRY! Trade, Foreign Policies, all these things the Liberal Media bitched, and moaned about before, all those so-called reasons they used to consistently bash the United States and her people are still there, except now there is a New Guy in charge.

I wonder what has changed exactly. Barack Obama is not some Magical Deity who is going to wave a wand, say some magical words, and suddenly make all the trouble in the world go away. He, like George W. Bush before him is just a man. A man who will do what he feels is in the best interest of his country and himself. He is a politician with not a lot of experience, but a politician none the less.

So maybe the Liberal Media should get down off their soap boxes for a while because apparently the air is a bit too thin up there these days.
at February 20, 2009 No comments: 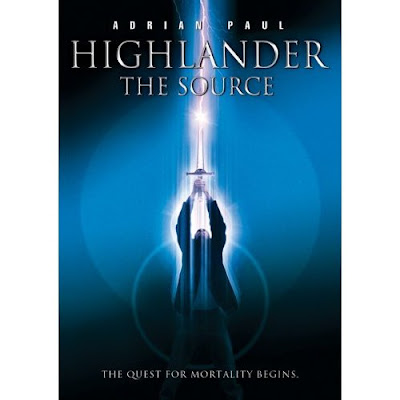 HIGHLANDER The SOURCE
Directed by Brett Leonard
"Seek the sauce..."
From the dawn of time they came, moving silently among us. They cannot die, unless they are beheaded, they are immortals… and their time is coming to an end. Sometime in the future the world, well Eastern Europe anyway, is in ruin for reasons never adequately explored, and Duncan Macleod (Adrian Paul) seems to be some kind of silent guardian, watching over the city like freaking Batman or something, and fighting crime. Then we find out via Mac’s old friend Methos (Peter Wingfield) that some kind of cosmic planetary alignment that makes no sense scientifically is going to bring about Armageddon while at the same time pointing to “The Source” of immortality. And this is just the first fifteen minutes, we also have the cheesiest villain to EVER pick up a sword in a Highlander production, and I am including all the previous flicks, every episode of the TV series, AND the hideous cartoon series from the nineties, and of course the so-called “greatest love of Macleod’s life” who has conveniently never before appeared in any other media, yet we are expected just to accept that she’s always been around I suppose.

To say that HIGHLANDER THE SOURCE is the worst of the Highlander flicks is a given; it is without a doubt the worst piece of Highlander fiction ever released. With the exception of Methos, and Joe (Jim Byrnes), the characters are weak and uninteresting, (even Adrian Paul looks bored throughout) the story is a bore, and the action sequences flat, the visual effects are TV movie in quality. All in all this is a brutally bad flick.

The funny thing is it came out on DVD about a year ago and sat on my shelf for a long time before I slipped it in the machine to give it a go; the first time I fell asleep thirty minutes in, a few months later I tried again, and I could not get through it on that second go around. Today as I sat at home doing laundry, I decided to try it again, this time I watched it all the way through. Mercifully, it was only 86minutes long, I swear if it was any longer I think I would have cut off my own head. And don't even get me started about the ending... yeesh!

HIGHLANDER THE SOURCE slices on to DVD with a dark, murky 2.35:1 anamorphic transfer and a somewhat less than adequate 5.1 Dolby Digital soundtrack. The so-called special features include “Highlander the Process” – A Behind the scenes documentary, Storyboard to Scene Comparisons, a Tribute to Bill Panzer, and a sneak peak at the upcoming Highlander video game for the x-box 360.
In the end there can be only a ONE out of FIVE.
at February 12, 2009 No comments: