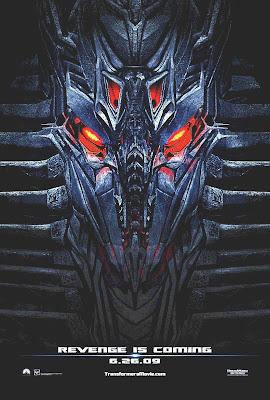 Transformers: Revenge of the Fallen

Two years after the events in Transformers the Autobots are working with a secret military taskforce hunting down rogue Decepticons. Meanwhile, Sam is off to Princeton University and wants to start off his new life sans giant alien robots, but lurking in the background a new sinister threat looms…

Okay, off the top as I have said before (I coined the term of phrase actually): Michael Bay is part of the problem with Hollywood today. He, and the major studios, are a big reason why it is so difficult for independent writers and filmmakers to get studios to look at their work, and one of the reasons why flicks cost so godsdamn much to make these days, and why it costs thirteen bucks a seat @ the box office.

BUT that being said, you give Bay 200 million bucks to make a flick about giant robots beating the crap out of each other and blowing shit up, and you are not left wondering where all that cash went. Every penny of that 200 mil is visible on the big screen.

In fact, the first hour of this flick is pretty good, robot fights, explosions, Megan Fox… hmmm… anyway it all builds up to a decent climax, then it stalls out, sputters back to life, then starts the whole process all over again, both exhausting and deafening the viewer by the time the final credits roll. The plot is simple, the movie is loud, bombastic, popcorn fodder. Its funny I read Roger Ebert’s review the other day and he used the term “incomprehensible” when he described the plot. Er, really Mr. Ebert? Methinks if he finds to plot of Revenge of the Fallen too difficult to understand, then maybe its time for him to hang up his pen, and give up his balcony seat to ME because he is clearly suffering from the mad cow… but I digest…

Who cares about the story anyway! Bring on the giant alien robots fighting, of which there is plenty in this flick. Once again John Tuturro is one of he best things about This Transformers flick, oh and Megan Fox… did I mention she’s in this flick? And that she is uber-hot?

Anyway, the problem that writers Roberto Orci, Ehren Kruger, and Alex Kurtzman, have in this flick is trying to please all those stupid-assed, obsessive, bot fan-boy choads by throwing a heap of so-called “fan favourite” characters into the flick that do nothing but show up onscreen for two minutes, say one or two lines and are gone from the screen faster than Keyser Söze. Somebody tell me what the point was in having the constructicons and Devastator in the flick at all? Any Decepticon could have climbed up the pyramid and started busting shit up only to get blasted in half five minutes later. My advice to Orci, Kruger, and Kurtzman is to completely ignore the fan-base and try to write the best film they can, that makes sense and ties up the half dozen or so loose ends left dangling in this mediocre “summer blockbuster.”

It’s not all bad really, that bit at the beginning with all the home appliances turning into Decepticons amused me because back in 1985 Julian and I came up with the exact same ideas, for our own personal amusement of course… I’m sure Michael Bay didn’t somehow get a hold on my old notes and drawings…or DID HE? Heh, just kidding.

In the end it just isn’t a very good flick, and that’s too bad. I was expecting “The Empire Strikes Back,” and instead got “Attack of the Clones.” Oh well, better luck next time.

Oh, and it was nice to see Starscream (my fave Decepticon) get a few more lines and stuff to do in this flick, so that and the hotness of Megan Fox, is why Transformers: Revenge of the Fallen gets a TWO out of FIVE.
at July 19, 2009 1 comment: