Reviews From the Chesterfield

No Dropping Out: Back to School at 35 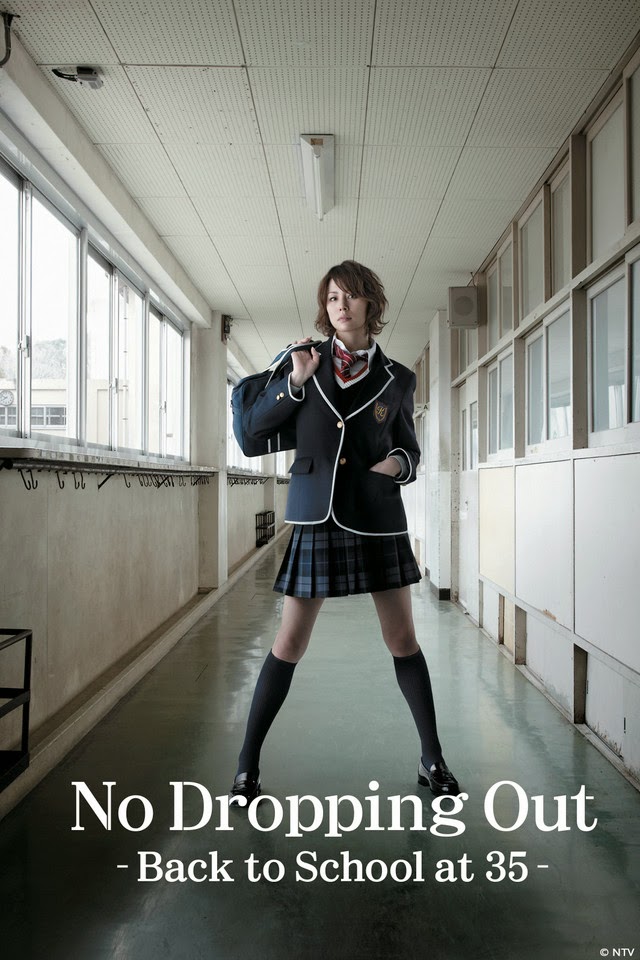 The term “High School is Hell” has been tossed around since time immemorial, but apparently this has never been truer these days than it is in Japan.  This 11-episode television drama centres around 35 year-old drop out Baba Ayako (Yonekura Ryoko) who mysteriously returns to high school and ends up changing the culture of the school administration and influencing the lives of the students.  The drama deals with the darker realities of Japanese high school, like bullying, the pressure to succeed, abuse, and teen suicide in ways that no North American drama could ever hope to.

I stumbled upon this programme recently on Crunchyroll and decided to give it a shot, and am glad I did, as it gave me insight into the darker side of Japanese culture that a lot of their films and television shows rarely touch on.  Only once in a blue moon does one come across a TV show that is unafraid to peel back the layers and expose real societal problems in any more than just a superficial way.  The only other one that comes to my mind is Kyoto Broadcasting’s superb 26-episode anime adaptation of Tatsuhiko Takimoto’s darkly humorous novel, Welcome to the NHK.   The material can be strong meat at times, and the actors are asked to dig deep to dark emotional places, and do they succeed?  I say admirably.   That’s not so say it’s all dour, and gloomy, the show has its share of humour as well from slap-sticky moments with the teachers, to the funny repartee between Baba-san and her friends eating lunch on the school roof.
So, if you dig a well written, well preformed sometimes humorous drama, and you love all things Nihon, check out No Dropping Out: Back to School at 35.
at November 25, 2014 No comments: 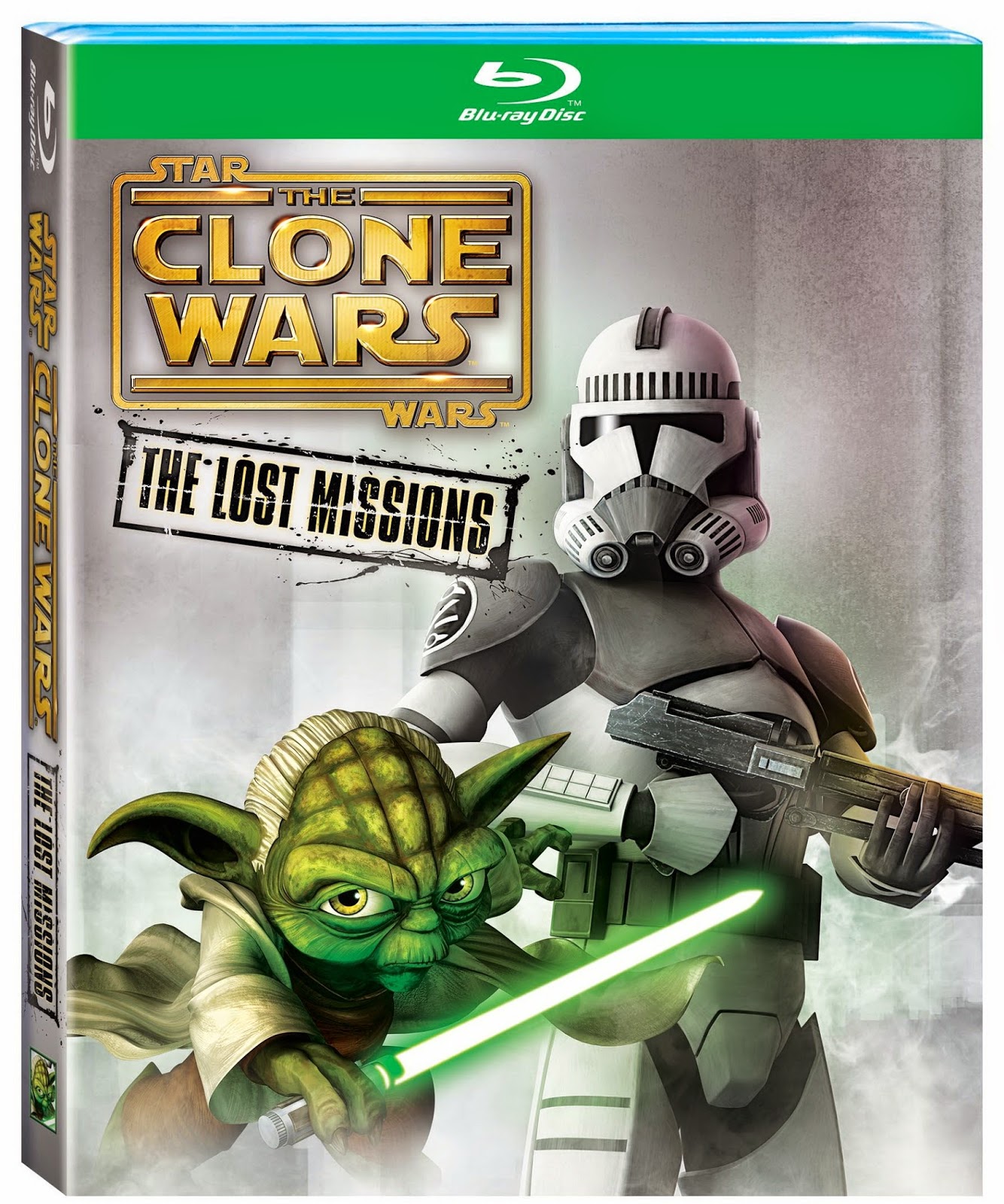 The final completed episodes of Star Wars: The Clone Wars (previously released on Netflix) are finally available on blu-ray in a two-disc set: The Lost Missions.
The set includes 13 episodes of what was supposed to be a full 22 episode season, and as nice as it is to at last have all 121 episodes of the series on blu, the overall story itself has left more than a few unanswered questions, and plotlines left dangling.

The Lost Missions gives us 4 story arcs of varying quality, including a terrific 4 part story about the origins of “Order 66” that even manages to touch on the morality of creating what is essentially a “slave race” to fight in a war in a way the prequel trilogy never did.  Next up is yet another yawn-inducing 3 parter about banking regulations, a humorous 2 part Jar-Jar/ Mace Windu team-up, and finally an utterly fantastic 4 parter that at last solves the mystery of Jedi Master Sifo Dyas, and gives some deeper insight into Yoda, and the very nature of The force itself.

This being a Disney release, the video quality is nothing short of phenomenal, and is noticeably better than previous season blu-ray releases.  This is due to Disney’s use of a higher average bit rate than the previous Warner releases of seasons 1-5.

The audio presentation, on the other hand… well lets just say Disney cheaped out on us.  Instead of the usual lossless DTS-HD MA 5.1 Surround track we’ve gotten used to from seasons 3-5 blu-ray releases, Disney gives us a somewhat less hearty, lossy Dolby Digital 5.1 track.  It’s decent, just not the bombastic awesomesauce we’ve come to expect from The Clone Wars.

Extras are few, and a little disappointing really.  After six seasons, 121 episodes, and literally hundreds of hours of behind the scenes material “in the can” we only get an anaemic 16 minute documentary?  Three words: Not. Good.  Enough.  The highlight of the extras is a set of “story reels” for the unfinished 4 part “Utapau arc” consisting of full audio and pre-viz animatics.  A shame Disney didn’t allow Filoni and crew to finish these, as this story is pretty damn good.  Conspicuous in it’s absence is any mention of the “Son of Dathomir” 4 part Darth Maul arc that made it to script and design stage before Disney put the kybosh on the programme.  It would have been nice to have the scripts and designs available as a special feature, but alas it was not to be.  I never thought I’d say this, but in the case of Star Wars: The Clone Wars, cancellation came far, far too soon…

An up and down set of episodes, lack of meaty extras, and a lossy audio track means Star Wars: The Clone Wars The Lost Missions can only get a 3.5 out of 5.

At the time of this writing I am in the beginnings (chronological episode 21, “Mystery of a Thousand Moons”) of a complete Clone Wars viewing marathon, watching every episode of the award winning series in Chronological Order from “Cat and Mouse” to “Sacrifice.”  When finished, I will post a complete series retrospective where I’ll give my thoughts, and feelings on the series as a whole, as well as comparisons to Disney’s new Star Wars: Rebels series.  21 episodes and 1 movie down, 100 episodes to go!