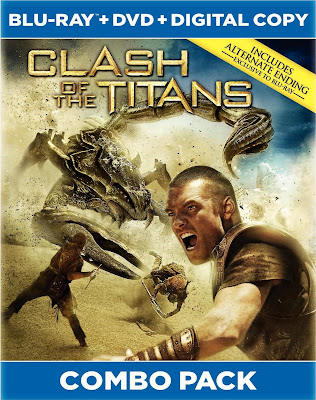 Clash of the Titans
Directed by Louis Leterrier

Oh Hollywood, are there really no more original ideas out there at all? For those unfamiliar with the story, Sam Worthington (Terminator Salvation) plays Perseus, the bastard son of Zeus (played with tremendous scene-chewery by Liam Neeson) on a quest to avenge the death of his adopted family at the hands of Hades (Ralph Fiennes, Vodemorting it up big time).

Not so much a remake, as perhaps a re-imagining of the 1981 Desmond Davis flick of the same name, the 2010 version takes massive liberties with the original work, sometimes for the sake of 21st century storytelling conventions, and others seemingly just so we get to see more CGI monsters on screen.

Look, I’m not one of those choad fanboys who is going to claim that Ray Harryhausen’s stop motion monsters in the original are superior to the CG creatures of the new flick, but there was certainly something charming about that particular form of visual effect that we have lost in this modern world of CGI fakery. But enough about the FX, they are pretty damn good, especially the Kraken, and Medusa if for no other reason than their sheer menace on screen. Medusa the Gorgon’s moves seem more intelligent, nastier, and more vicious as she deals with Perseus and his choads, whereas in the original flick it seemed like anyone with more that half a brain could run circles around her.

There are some decent performances throughout, although Sam Worthington seems a bit out of his element when sharing the screen with Liam Neeson, but then who wouldn’t? Some of the characters seem to be just thrown in to pad out the flick, Gemma Arterton (Quantum of Solace) as Io immediately springs to mind as a character that was thrown in just so Perseus could have some kind of love interest, as well as the two dudes with axes that show up, leave, then show up at the end just in time to save the hero for seemingly no other reason than as a convenience for the writers.

The PQ and AQ are decent but certainly not perfect, the audio will certainly give your Home Theater a workout, but it seemed like it was recorded at a slightly lower level than most other blu-ray flicks in the last couple of years...

Don’t get me wrong, the flick isn’t terrible, it just isn’t very good and it leaves me wondering if some studio head was looking through properties, found Clash of the Titans, and thought: we should re-do this flick, but with CG! To which I reply: just because we can do something, doesn’t mean we should. Three screaming Gorgon Heads out of Five.

blu-ray cover image stolen from Blu-ray.com
at August 01, 2010 No comments: