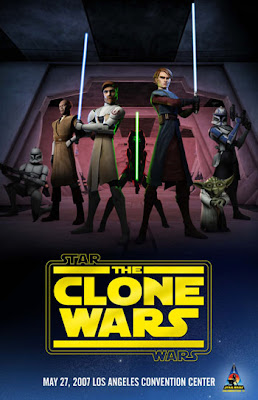 Lets get the B.S. over with first, I know this is just the first three episodes of the new TV series re-edited into a 95minute flick. This DID NOT have even a quarter the budget of something like Ratatouille so lets not even make such a ridonkulous comparison. In other words, all you haters out there living in your parent's basements blogging on rotten tomatos with the "brilliant" observation that "the animation sucks" can just shut your drooling trogladitic traps right now beacause I don't want to hear it.

As a kid when I first saw Star Wars, I always wished that some day there would be a cartoon series made. In the mid eighties we got Droids, and Ewoks shows that lets be honest, were less than stellar. Then came the Clone Wars Micro-Series, this was more like it! Action, adventure, and most of all, FUN seemed to have returned to Star Wars on the small screen.

Which brings me back to this flick: I loved it. I loved it because I love Star wars and I love cartoons. Especially cartoons with lots of explosions in them. If you don't like either Star Wars, or cartoons, then you will not like this, it's that simple. It was pretty much everything I was expecting, except for maybe a stronger plot, but it still managed to get me even more charged up for the new TV series debuting this fall. What more could you want? This flick is FUN, and arguably better than Phantom Menace, so you can't really go wrong.

Not really, but stay tuned for some new Monkey Brained madness later in the week! Sorry to my three readers for being the lazy bastard that I am!
at August 05, 2008 No comments: