Working in an office has its perks; free coffee, internet, comfy chairs, and occasionally someone will bring in deliciously tasty treats like boxes of doughnuts or sausage rolls.

After the initial stampede of workers, stomping and elbowing their way to the free food as if they hadn’t eaten in a fortnight, there comes the inevitable lull and as the morning begins to wear on, the number of treats diminishes until the moment arrives when There Can Be Only One item left on the table.

So tell me who the hell is the psycho that ALWAYS chooses to eat like half a doughnut, or who takes one bite from a sausage roll, then puts it back on the table??? Honestly if you want to eat it, then JUST EAT THE FRIGGING THING!

If you don’t think you can finish an entire item then here are your choices:

1. Leave the item the fuck alone.

2. Throw out the rest of the food item after you have partially consumed it. Why? Because if I see food sitting anywhere, all sad and half-eaten like, looking pathetic in a dusting of it’s own crumbs, you bet your ass it is going in the trash.

What the hell is wrong with you people anyway?

This is not the end, not by a long shot! 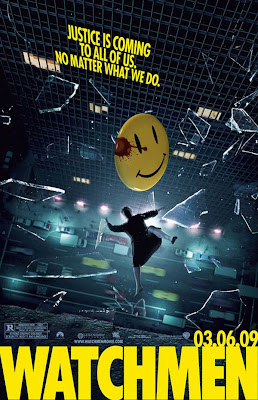 “…two riders were approaching, and the wind began to howl.”

My hands were still shaking a little when I wrote this out in long hand, my brainmeats trying to decompress from what I witnessed on the giant IMAX screen only hours before.

Back in the eighties I used to go to a place called “Back To The Future Comics” for my bi-weekly four-colour fix, and I remember reading in one column or another about a 12 issue series by Alan Moore and Dave Gibbons called WATCHMEN that was coming soon. I was intrigued, the book sounded like something I would dig, so I told the comic store guy to add the title to my file at the store.

Reading it all those years ago I remember telling my friends how fantastic it was, but not once did I ever believe a film could be made of it. Indeed, I stated on many occasions to my comic book enthusiast friends that the story was “un-filmable.” Now after seeing the flick, I hold to my earlier statement.

Don’t get me wrong, WATCHMEN is not a bad film, on the contrary, it blew me away, the problem is that I am a “fanboy.”

The WATCHMEN books were something I’ve read many, many times over the years, each time discovering how densely layered the storytelling was and how it succeeds on every level even to this day. The story, the art, the supplements, everything works together to achieve a cohesive whole and if even one “cog” wasn’t there it could not have been as brilliant as it turned out to be. These twelve issues, later collected into graphic novel format and reprinted dozens of times truly changed the way we look at comic books forever.

As I have stated many times before, Film and Graphic Novels are two very different mediums, yet throughout the flick my mind could not help but drift to what was left out and what was changed. I enjoyed the film, but by knowing the original source material as well as I do, it changes the way I look at the film. The good news is that unlike the film adaptation of Harry Potter and the Order of the Phoenix, you won’t have to have read the book to understand what’s going on in the film.

Performances are solid throughout, especially Jeffery Dean Morgan as Edward Blake aka The Comedian. Also the music, sound, and set design, are all fantastic, and the level of detail in the world of WACTHMEN is exceptional to say the least. The story, while still satisfying, I think still left too much out, but I believe that’s more my problem than Zach Snyder’s who clearly from the very first frame shows he has a great passion for the source material.

Will Alan Moore hate it? Of course he will! He took his name off the project the second it was green-lit, and stated in Wizard #209 “I’m NEVER going to watch this fucking thing.” But can you really blame him considering the cinematic abortions that were League of Extraordinary Gentlemen, and From Hell?
As for me, I give WATCHMEN Four blood-spattered smiley-faces out of Five.
at March 08, 2009 No comments: