It is Time of Game!!! Another brutally honest review by The Jaeger. 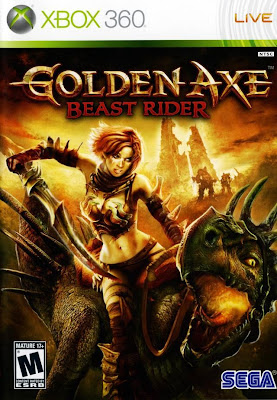 How do you take a beloved, classic, two-player arcade game and turn it into a mediocre single-player experience? Well, you’ll have to ask the boys and girls at Secret Level because that’s exactly what they delivered with Golden Axe™ Beast Rider.

I have to admit when I first heard about this game I was excited beyond all reason, having been as I was a ridonkulously huge fan of the original arcade classic. Indeed, me old pal McBain and I burned away many, MANY hours defeating the dreaded DEATH=ADDER on more occasions than I can remember, so I wanted to give this latest incarnation of the game some serious play time before writing the review. So although I didn’t have the skill to finish the game, I played enough of it to realize that the Golden Axe I knew and loved was gone forever, only to be replaced by this slick looking, next-gen “re-imagining” that to be brutally honest, does not hold up to the original.

Lets start with the good stuff. The graphics, and visual design are top notch, and pretty to look at, the backgrounds are exceptional, the character designs are fresh and exciting, the voice work and music is also half-decent, and help to lend an epic feel to the game.

Unfortunately, the element of the game that counts the most, that should be the most fun, the actual play is severely lacking. The beast riding element, arguably the best part of the original game, is clunky and uninspired, and adds nothing to the overall experience. For the ground based combat, the developers tried to go in a different direction. Instead of making combat a simple hack and slash, button-mashing affair which could become tiresome after eight or ten hours of game-play, they went with a system that requires lightning quick reflexes. Enemy attacks are telegraphed a half-second before they happen by certain colours that indicate whether you have to use a heavy, or light block, and then respond with some perfectly timed attacks resulting in counters that when they actually worked, were absolutely brutally satisfying. The problem is, they only work about half the time, making a great deal of the combat a frustrating chore instead of the fun experience it should have been. For example, many obstacles can only be knocked down while riding a beast, which leads to many instances of backtracking to a beast spawn point. Then one has to fight through a group of baddies, inevitably leading to Tyris being unseated from her beast, and having to once again defeat the baddies, then backtrack to the beast spawn point, ride all the way back, fight more baddies and ultimately do the whole fucking thing all over again.

Another aspect that made the original game so much fun was the two-player co-op aspect, a feature that is conspicuously absent from Golden Axe™ Beast Rider. Another problem I had was with the XBOX 360 Achievements; they are nearly impossible to get! Most of them can only be unlocked by completing the game once and unlocking the special “Battler’s Blade” sword, a weapon that kills opponents with one stroke, but also frustratingly enough, makes Tyris vulnerable to one-hit death! I’m not saying achievements should be as easy as five points for pressing the “Start Button” (thank you Simpsons the game!) but they shouldn’t be so absurdly hard as these ones are to unlock.

So, if you are the type of gamer that has Jedi-like reflexes, and has no problem with clunky game-play and frustrating melee combat, then this is the game for you, unfortunately for me; I just don’t have the patience for it. A TWO out of FIVE.
at April 05, 2010

It is time of "what the fuck are you talking about?" This game is a copy of Frogger..without the frogs and shit.