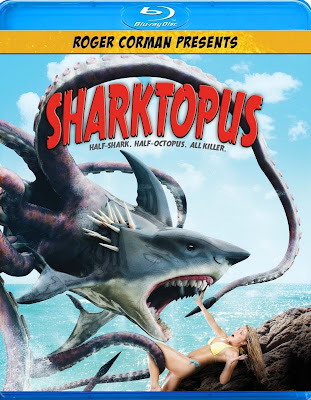 In film and writing there are the good, like The Empire Strikes Back, and Tropic of Cancer, the bad, like Avatar, and EVERY book based on a woman “writer’s” crap blog. There is also a third category I like to call BAD/GOOD, or something so BAD it’s GOOD, like Plan 9 From Outer Space, and The Eye of Argon. Sharktopus belongs in this third category.

Eric Roberts (Academy Award Nominee Best Supporting Actor, 1985 Runaway Train) plays Dr. Nathan Sands, the Doctor Frankenstein-esque scientist and creator of the Top Secret S-11, AKA: Sharktopus, a biological weapon created for the US Navy, and designed to infiltrate enemy waters without detection, and carry out whatever missions the Navy sees fit to program it with. But of course as with all these types of experiments, there is an “unforeseen” accident that damages S-11’s control device, the creature frees itself and of course, goes on a rampage. Cheeze-filled awesomeness ensues.

Goofy, wicked, NEVER SCARY, and always played with tongue planted FIRMLY in cheek, this SyFy Channel “Movie of the Week” Produced by Roger Corman for all its goofiness manages never to look “cheap” like most TV movies. Clearly the Sharktopus itself is a wonderfully fake-looking CGI monster, but it is certainly apparent they spent some money on it, more than they did on actors for instance.

The video is a fairly mediocre 1080p MPEG 4 AVC transfer which fluctuates from sharp to soft more times than you can count, but the audio is a solid Dolby Digital True HD 5.1 track that does it's job quite well.

The flick knows its audience, geeky fan-boys who can laugh at themselves, and plays to that audience. Sure the performances are poor, (Liv Boughn) even BRUTALLY BAD at times (Julian Gonzalez), and the Visual Effects are, to borrow a phrase from me old mate McBain, “the O-Pitome of Cheese,” but all in all it is a heap of fun and entirely watchable. A word of warning however, if you don’t understand, or enjoy bad/good stuff like Plan 9, The Toxic Avenger, and Death Race 2000, then keep well clear, but if bad/good is something you like, then by all means take the plunge and rent this flick immediately!

Sharktopus gets FOUR naughty tentacles, out of FIVE.