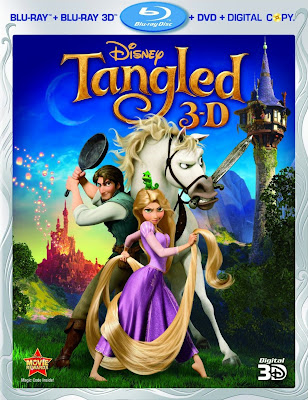 Disney has gone back to their 1980’s formula of “musical theater” for their animated features beginning with 2009’s wonderful, and imaginative The Princess and the Frog. That musical storytelling tradition is continued with their latest feature, the thoroughly mediocre “animated classic,” Tangled.

This is Disney’s 50th animated feature so one would have expected a spectacular feature to celebrate that milestone. Instead, what we get is a run-of-the-mill re-imagining of Grimm’s tale of Rapunzel that while it has it’s decent moments, never rises to the level of the original source material, or even previous Disney animated efforts. The flick falls flat through uninspired songs, and completely lackluster vocal performances by Mandy Moore, and Zach Levi who play Rapunzel and Eugene respectively.

The look of the flick is quite stunning however, from the background design, to the animation mechanics behind Rapunzel’s trademark long, blonde hair. The flick’s MPEG-4 AVC encoded 1080p presentation is also quite good, but I would expect no less from Disney Home Video these days, and the DTS-HD MA 7.1 soundtrack is fabulous, giving all home theater audio channels the workout they deserve. The supplemental package is especially disappointing with its conspicuous lack of director’s commentary, or anything of real value. This is especially annoying considering what we have seen from Disney’s other animated Blu-ray releases.

Unfortunately the awesome audio and video presentation does not make up for an average story that falls flat on almost every level, especially the ending.

Based on it’s weak story, and a distinct lack of substantive extras, I can only give Disney’s Tangled TWO wacky hair gags out of FIVE.
at May 17, 2011