Hunter was dreaming of flying.  He soared with his arms outstretched, wind all around him, never cold, never uncomfortable, the feeling of freedom was total, and beyond anything he had ever felt in the waking world.  Up he soared, into the grey, cloudy sky faster than the speed of dark, above the city skyscrapers, then down like a hawk, straight at the ground, and just when it looked as though he would plough straight into the pavement at terminal velocity, he pulled up at the last yoctosecond, landing feather light on his feet.  Two steps later and he was on skates and full hockey gear, but without a stick.  He skated back to the bench and stepped though into the basement of his old girlfriend, Catelyn.  He was sitting on the small Ikea sofa looking into her eyes.  She looks the same as she did in high school, shocking blonde hair short and wavy on top blending down into a buzz-cut on the bottom, dyed a dark burgundy.  He couldn’t hear what she was saying as someone is banging on the door.  They jumped up off the sofa.  The banging continued.

The dream faded to the recesses of Hunter’s fuzzy mind.  He looked over at the ancient clock radio, the dim red digital LED numbers read 12:06.  He rolled over and looked up at the tin-foil covered window, tiny shards of light speared through randomly, illuminating particles of dust as the floated weightlessly through the air.  Hunter rubbed his eyes, annoyed.  Bill knew he was on the night shift this week, and he had only managed to get to bed three hours ago, and he felt odd almost as if his limbs were no longer attached to his body, yet at the same time unbearably heavy.

The bedroom door opened a crack, “You decent?”  Bill wanted to know.

Bill poked his head into the room, “Yer dads on the phone, and before you get all pissy with me, I’m only waking you up because he said it was important.”

There was an unwritten rule between the boys of Lond Ho that stated neither one of them was to be disturbed if their bedroom doors were closed, short of fire, earthquake, or alien invasion.  This was none of those things, but if Hunter’s auld man said it was important, then Bill wasn’t going to be the one to tell him to call back later.

Hunter threw the covers off and slipped into his black and red hooded school robe and stepped into the hall.  He stubbed his toe on a beer bottle lying on the floor and nearly stumbled, catching himself on the Big Leather Chair. The bright red, plastic handset for the phone was on the arm of the chair and Hunter picked it up as he flopped into the chair’s fat, plush seat cushion.

Bill was back in the kitchenette doing the washing up.  He enjoyed doing the dishes, well maybe “enjoyed” was too strong a word.  More accurately he tolerated doing the dishes if for no other reason than he knew if he took care of them, they would be done right.  The first (and last) time Hunter had done the washing he had mixed together glasses, dishes, pots and utensils together in some insane, random miasmic nonsense that Bill could not abide.  Didn’t Hunter realise there was a right way and a wrong way to do things?  Glasses get washed first when the water was cleanest, then dishes and bowls, then came utensils.  The water is drained and changed, then the pots and pans go last.  It made perfect sense to Bill, a shame Hunter couldn’t get his head around it.  From that first random dishwashing moment, Hunter had been relegated to drying, which was fine with him.  He never liked doing the washing up anyway.

Upon hearing the plastic click of the phone being hung up, Bill stepped back into the main room with a dish-towel over his shoulder.  “You ready to dry?”

Hunter was sitting in silence, a strange look on his face.  His skin had lost all colour and he looked totally out of it.

“Hm?”  Hunter looked up as if just realizing Bill was in the room.

“You all right?”  Bill ventured, taking a step forward.

Hunter was looking around the flat as if he didn’t recognize the place, “Oh yeah, sure.  Fine.  I gotta go to my parent’s place.  They’re putting the dog down.”  His voice was flat, dry, and bereft of emotion.

“Oh, hey sorry to hear that man,” Bill said, taking a few more steps closer to where Hunter sat, looking so small in the Big Leather Chair.  Bill clenched and unclenched his fingers, wondering if he should put a hand on Hunter’s shoulder to try and comfort him or something, but ultimately decided against it.  Hunter didn’t like to be touched, and Bill didn’t want the situation to get any more awkward than it was.

“Right then, I’m going to finish the washing up…” Bill said, stepping back into the kitchenette.

Without even realizing what he was doing, Hunter was on the phone again, this time talking to his friend Kelli.

“I really hate to ask, but could you maybe do me a favour and gimmie a lift to my parents?”

Kelli detected something in his voice, something sad and desperate,  “I’ll be right there.”

Hunter sat in silence, his hands flat on the top of his thighs, staring straight ahead at the traffic on the freeway.  He barely remembered getting into the car, or the trip out of the downtown core to the freeway.  Kelli asked him what was wrong at one point and he was pretty sure he answered, but if asked he couldn’t have recalled his exact answer.

Kelli took one hand off the steering wheel and reached over to give Hunter’s hand a tender squeeze of support.  Hunter jerked his hand away as if stung.  He disliked physical contact at the best of times, but this was different.  His mood was dark, dour, and he wondered briefly if losing his “puppy,” his childhood “best friend” would spell a “farewell to tenderness” for his very soul.

Kelli sighed, she was just trying to show him a little support, and he wouldn’t have it.  Why was it Hunter just couldn’t accept the tiniest of touches from her?  She was only trying to help, to show some kindness.  He must not have understood that he needed Human contact when he was like this.  She was beginning to wonder if this was going to be the way it always was with him.  She exited the freeway on Bow Bottom Trail as the stone walls and gabled rooftops of the suburbs hove into view.

Hunter closed his eyes.  In this moment, memories of the dog he affectionately called “Dal-chan” flooded his mind.  He remembered picking her up at the farm, scratching the proud mother and father dogs behind their ears.  The doggie daddy, a big, fluffy, grey, black and white Siberian Husky, was HUGE, easily the biggest dog Hunter had ever seen. And friendly to boot!  He plodded over to ten year old Hunter and sat down at his feet, licking his face when he got in close.  Hunter giggled and almost fell over.  The doggie mommy was an Alaskan Malamute, grey, brown and white.  She seemed a little more nervous than the daddy, she seemed to know that people were there to take her babies away.  Hunter flashed forward a year, he was sitting in the pool in back yard of their house in Phoenix the day Dal-chan came out of quarantine.  He sloshed out of the pool as his puppy padded around the corner, a pink ribbon around her neck.  She licked his face as he hugged her and scratched her neck, promising he would never let her go again.  Another year another house, this one on a hill, Dal-chan sat out on the back deck, proudly puffing her white chest out as she looked out over the fence, across the rooftops at her domain.  Hunter watched her from the back door, not wanting to spoil the moment.  More memories, running in open fields, giving a big “woof” at strangers who strayed too close, but then running over and allowing them to give her head a scratch, walking, just walking.  There were a lot of walks.  A lot of scratching behind the ears, a lot of doggie licks to the face, hands, legs too many good memories, Hunter couldn’t quite believe that after today there would be no more new memories, only the old, fading as time marched on until one day only a fuzzy, indistinct recollection would remain.  It seemed to Hunter that his whole life was a blur of late, one day fading into the next, becoming as indistinguishable as grains of sand blowing across the dunes

The car rolled to a stop.

“We’re here,” Kelli announced, “You need me to come in with you?”

Hunter shook his head, “No thanks kid, I have to do this alone.”

Hunter stood out on the back deck, his parents stood on the other side of the storm door to give him some time to say goodbye.  Dallas the thirteen year old Malamute/Husky was curled up on the cool cobbles in front of the garage.  She looked up as Hunter walked down the stairs towards her.  She struggled to stand, to run over to greet him like she always did, but her hips would not allow it and she collapsed to the ground.  Hunter stood beside her for a moment, then dropped down beside her, stroking her fuzzy head.  Tears began forming in his eyes, but Hunter quickly wiped them away, determined not to cry. She turned to him, gently licking his hands.  He got closer, and she gave him some face licks before suddenly stopping.  She looked up into Hunter’s eyes, and as if sensing his distress gave him a look that seemed to say: “It’s okay.”  Hunter looked back into Dal-chan’s big, brown eyes and hugged her like he had a thousand times before, knowing it was the last time.

It was close to thirty minutes later when the auld man knelt down beside Hunter.

“It’s time son,” he said simply, putting a hand on his boy’s shoulder.

“Okay,” Hunter swallowed, gritting his teeth, holding back tears through sheer force of will.  He was determined not to show his emotions in front of the auld man.

He gave Dal-chan a final kiss on her fuzzy dome, and she gave his face one final, tender doggie kiss.  Hunter had to leave, another second and he would break down completely, and he could not allow that to happen.  He got to his feet and said goodbye to his parents, heading in the direction of the side gate.

He didn’t remember getting into the car, or what he said as they pulled away from the curb.  After merging back on to the freeway, Kelli reached over and squeezed Hunter’s hand.  This time he didn’t pull away.

They drove in silence until the downtown skyscrapers loomed into view on the horizon.  Hunter’s eyes suddenly began to well up with tears, but by now his discipline had all but abandoned him, his foolish attempt to control himself was finished and he knew he had to let go.  Tears filled his eyes and ran hotly down his face, but this time he allowed them to flow for as long as they had to. 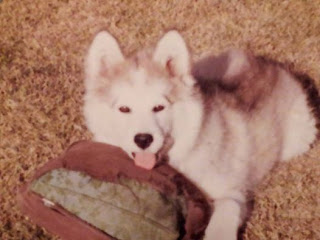