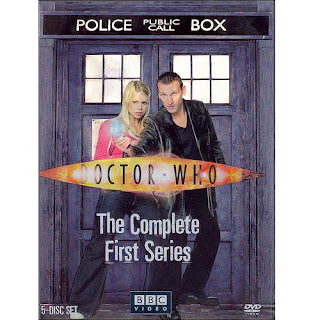 Ordinary, middle class London shop girl Rose Tyler (Billie Piper) is taking care of some end of the day drudgery when she is set upon by the Autons, creepy living mannequins, and servants of the Nestine Consciousness.  Seconds before death, a mysterious stranger calling himself The Doctor (Christopher Eccleston) takes her hand, and together they begin the adventure of a lifetime.

From the opening FX shot where we pan down from orbit all the way to the busy London streets we know we in for something new, something special.  It was  2005 and the “wilderness years” had finally come to an end and Doctor Who was back on television in the UK and Canada thanks to Russell T. Davies.

It was a comeback that almost didn’t happen, and wouldn’t have if Michael Grade (the BBC bureaucrat who exterminated Doctor Who in the 1980s) and his cronies had their way, and their attempts to scupper the project before it began had succeeded.  Fortunately for us, and due to the tireless efforts of Russell T. Davies, Jane Tranter, Julie Gardner, and others, Michael Grade’s latest attempt to destroy Doctor Who failed and the series returned.  A more detailed analysis of the struggles behind the programmes return to television can be read in Doctor Who Magazine #463, and #464, as well as the 23min documentary, Doctor Forever! – The Unquiet Dead that can be found on the recently released Special Edition of The Green Death.

When I first heard of Doctor Who’s return to telly I found myself both excited, and more than a wee bit nervous.  If the programme had returned and was indistinguishable from the original (now classic) series how could it possibly last?  In the 21st century is there really room anymore for cheap, multi-camera, studio based serial sci-fi drama?  Would the tightwad BBC actually give the show a chance by giving it the kind of money it deserved?  And what about the most important thing, the casting?  Who would play the new Doctor Who?

Well eight years on the answers are obvious, Russell T. Davies brought the programme into the 21st century by making the show faster, more intense, and absolutely refusing to accept the old, stuffy BBC adage of “good enough for Doctor Who.”  Taking his cue from shows like Buffy The Vampire Slayer, and Smallville, RTD gave us fast paced, character driven stories told in a slick 45min package.  Christopher Eccleston was fantastic as The Doctor, and I fell in love with Billie Piper as Rose Tyler.  Doctor Who was back, and better than ever.

Doctor Who: Rose (as all of NewWho up to the end of the fourth series) was shot in Digital SD at 16:9 aspect ratio, and looks decent enough, especially when up-converted to 1080p.  It may be of interest to note here that the complete new series 1-7 is soon to be released on blu-ray, with series 1-4 professionally up-converted  to 1080p, so if you don’t own any of this material yet, you might want to wait for this special set.  The audio is a decent Dolby Digital 5.1 Surround mix that while it won’t blow up your home theatre, it’s certainly adequate for the material.

The New Series also gave us a new delivery system to get DVDs into the fan’s hot little hands.  This review is from the DVD box set, Doctor Who The Complete First Series Collectors Edition.  This set has a heap of extras including audio commentaries on every episode featuring writers, directors, producers, special effects artists, and actors.  Every disc also includes episode specific special features, and last but not least a whole disc dedicated to the “making of” series Doctor Who Confidential.  Unfortunately for North American fans, these episodes are “cut down” versions of the actual documentaries that the UK fans got to see, with all scenes from the Classic Series, and some musical cues edited out, which means each one clocks in at between 10 and 12mins a piece as opposed to the 22mins of the original broadcasts.

Why should you revisit this episode?  Besides it being the first story of an all new era of Doctor Who, it also includes a nod to the past with Robert Holmes’ Autons last seen in the 1971 Classic Series story Terror of the Autons.   It’s also interesting from a historic point of view to see how the programme has changed over the last eight years going from the more “grounded” Russell T. Davies years to the more “fanciful” direction Steven Moffat has taken the show in the last three series.

Doctor Who: Rose gets FOUR alien animated shop mannequins out of FIVE.