June is Sixth Doctor month and I had wanted to do a review of Story No.141 The Two Doctors, but this title has been pulled from stores and discontinued because of a featurette that contains a few seconds of Jimmy Saville footage.  That said, lets get on with this months Sixth Doctor DVD review of… 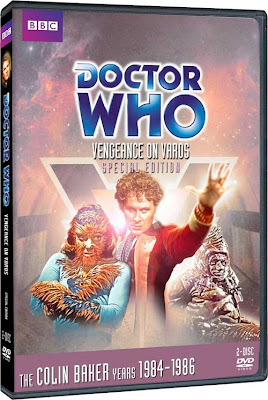 The Doctor (Colin Baker), and Peri (Nicola Bryant) arrive on the planet Varos  in order to acquire the rare mineral, Zeiton-7 needed to repair the TARDIS.  Varos, a dangerous world where the government controls it’s citizens through extreme reality TV, and direct democracy can prove deadly for politicians.  Soon the Doctor and Peri are captured and accused of being alien infiltrators, and must fight for their lives in the Punishment Zone, while at the same time trying to save the starving citizenry from the machinations of the repugnant, reptile-slug Sil, played with a gleeful, villainous abandon by Nabil Shaban.

Full of action, violence, and a concept that is really ahead of it’s time (reality TV as we know it today didn’t exist back in 1985), I find Vengeance to be possibly the strongest story of Colin Baker’s tenure in Doctor Who.  Its nice to see a story that works on more than one level, on one hand a violent, horrifying story with a wickedly amoral alien monster stirring the pot, and on the other a thought provoking, and intelligent story about TV violence and the public’s desensitization to it, and the role of government in society.  The performances by Colin Baker and Nicola Bryant are excellent as usual, with only the occasional exception being Nicola’s dodgy American accent, but that never really bothered me as much as it does other fanboys.  The story also features the first television appearance of Jason Connery (son of Sean Connery), and the first appearance of Nabil Shaban as fan favourite villain Sil who would later return to the programme in Trial of a Time Lord: Mindwarp.  It’s a shame we didn’t get to see a lot more of his character in the programmes remaining four years. I quite enjoyed Vengeance on Varos, and if you choose to revisit the story, you will not be disappointed, its certainly my favourite Sixth Doctor story by a wide margin.  It’s not that his other stories are bad, (with the possible exception of Timelash) they are for the most part actually quite decent, but Vengeance is the one that tends to stick out in my mind when I think of Colin’s Doctor.  Indeed, so-called “reality” shows of today should take a hint from Vengeance, I mean imagine how watchable Big Brother could be if at the end of the week the viewing audience got to torture and kill the losing houseguest!  Yeah, you’re right… it still wouldn’t be worth watching.

Okay, now lets address the 600lb gorilla in the room: Colin Baker’s costume during his tenure is bloody awful, the poorest, of poor taste, its quite horrid really.  Colin himself even mentions his distaste for the outfit in the audio commentary.  The character of The Doctor is so over the top as it is, the costume doesn’t need to be as well.  My theory about the multi coloured/patterned costume has to do with show-runner John Nathan-Turner, who had a terrible dress sense and a particular affinity for Hawaiian shirts, and I think he wanted to force his own personal, hideous sense of “style” on the world, but who knows?  Having said that, The Colin Baker Years tend to get a bad rap generally from fans on the online forums, some of whom actually believe his tenure to be the weakest of the series as a whole, but I disagree.  I generally enjoyed his work as the Sixth Doctor, and think he never got the chance to shine, and this is the fault not of Colin, or the writers, but one man only: BBC executive Michael Grade.  It was Grade who at the end of season 22, when stories for season 23 had been commissioned, and some of them actually completed, decided to put the kybosh on the next series of stories, cancel the programme, then take off on vacation to avoid the inevitable fallout the announcement produced.  After returning from his holiday and finding thousands of letters from fans demanding the show’s return, Grade, ever the politician, back-peddled and said the programme was only to be “rested” for 18 months, and would in fact be returning.  Albeit with a considerably smaller budget, and the fewest number of episodes in the history of the programme.

The DVD itself has a massive selection of fantastically re-mastered audio tracks which include the original mono, a new 5.1 Dolby Digital track, an mono “studio” track, and two isolated score options in mono and 5.1 for those that like listening to just the music while watching a video.  The video quality is quite decent as well with the exception of a few soft scenes that tend toward the fuzzy side, but who knows if this was a mistake, or part the original intention of the Director and his DP.

Extra features include an amusing Audio Commentary featuring Colin Baker, Nicola Bryant, and Nabil Shaban, Nice of Nasty? a 29min Making Of documentary, 17mins of Deleted and Extended Scenes, another instalment of the doc series Tomorrow’s Times, the regular trails and continuities, PDF materials, and much, much more.

Doctor Who: Vengeance on Varos Special Edition gets FOUR horrifying reality shows out of FIVE.