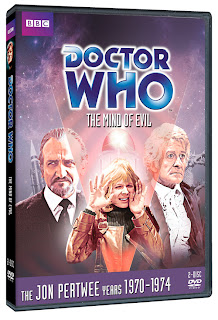 Doctor Who: The Mind of Evil Story No. 56
Written By Don Houghton
Directed By Timothy Combe

“Thank you, Brigadier.  But do you think for once in your life you could manage to arrive before the nick of time?”

Evil renegade Time Lord, The Master (Roger Delgado), posing as Professor Keller, has built a machine that can suck the evil out of the minds of even the most hardened of violent criminals.  When The Doctor (Jon Pertwee) and Jo Grant (Katy Manning) arrive at Stangmoor Prison for a demonstration, all hell breaks loose, as the machine is revealed to be an alien parasite that can project deadly hallucinations into the minds of those around it.  As it turns out, The Master is using the alien parasite to hypnotize the prisoners into helping him hijack a deadly nerve gas missile, in order to destroy an important peace conference and send the world spiralling into war.  So, not convoluted at all right?  Don’t worry, there’s some cracking good action sequences that will make you forget about the absurdity of The Master’s plot in no time at all.

The Mind of Evil, or Evul as the spine on the region 1 DVD reads, (Honestly BBC Worldwide, if you need a Copy Proof-reader, or Quality Control Manager, I know I could do a better job, so gimmie a call!) is the second story of the eighth season of Doctor Who, and one in which new producer Barry Letts was determined to put his stamp on.  Its with the introduction of a reoccurring villain, The Master, (played with wonderful Moriarty-esque wickedness by Roger Delgado) and the UNIT “family” of the Brigadier, Jo Grant, Mike Yates, and Sergeant Benton, that the Jon Pertwee era begins to really hit its stride.  Having said that, I think most Who fans, and even then script editor Terrence Dicks would agree that having The Master as the main baddie in all five season eight stories was a mistake, I know by the season’s fourth story, The Colony in Space,  I was already bored with him.  Oh look, it’s The Master again!  I’m about to have a heart attack from not being surprised!  I’m not to saying he isn’t a fantastic villain, just not every story please!

I only remember seeing maybe two or three episodes of this story back in the 1980s when KSPS, the PBS station out of Spokane that broadcast Doctor Who in my area showed it, probably because I had a hard time getting into the Pertwee stories at the time.  Having mellowed considerably on the Pertwee era since then, I was actually quite looking forward to this release, if for nothing else but to finally see it restored to glorious full colour.

The Mind of Evil contains some tremendous location shooting in Kent, including three days at Dover Castle which served as the exterior location for the fictitious Stangmoor Prison,  as stuffy government bureaucrats at the time refused to allow the production to film in or outside a real prison.  The UK Department of Defence however were extremely helpful with the production, loaning a real (unarmed of course) Thunderbird 2 SAGW missile from the 36th Heavy Air Defence Regiment, as well as a number of troops to play The Master’s minions.  The armed forces also assisted the production by allowing shooting at RAF Manston for the scenes taking place at Stanham Airfield.  Other location work included Cornwall Gardens in Kensington serving as the exterior for UNIT HQ, and the peace conference site was shot at the Commonwealth Institute, also in Kensington.

By this time (1971) Doctor Who was allowed to shoot regularly in the massive BBC Television Centre studios, and it is obvious.  The extra space allowed designers considerably greater freedom in building sets than they had in the 1960s when Who was relegated to the tiny, uncomfortable confines of Lime Grove Studios.  The interior prison sets are particularly good, and give a sense of scale, and realism heretofore unknown in previous seasons of Doctor Who.

This is also the first time since its initial broadcast that The Mind of Evil has been seen in full colour!  Episodes 2, 3, 4, 5 and 6 were restored using chroma dot colour recovery technique that has been used for other black-and-white Pertwee era stories like The Ambassadors of Death. The tele-recording of episode 1 did not contain any chroma dot information and had to be meticulously re-coloured manually by Stuart Humphryes and the Doctor Who Restoration Team, and the results are really quite stunning.  The audio is digitally remastered from the original mono and is probably as good as it’ll ever sound, I certainly could find no problems with the presentation.

The extras are a bit skimpy on this two disc set to be honest, but they do include an audio commentary with actors Katy Manning (Jo Grant), Pik Sen Lim (Chin Lee), Fernanda Marlowe (Corporal Bell), director Timothy Combe, producer Barry Letts, script editor Terrence Dicks, and stunt arranger Derek Ware.  The Military Mind, a fairly decent 22min making of documentary, Now and Then, a short doc that revisits the locations, and a 24min doc about BBC Television Centre shot in 1971.  Also included are the usual PDF materials, production notes, and a trailer for the upcoming blu-ray release of the only Classic Doctor Who story to be entirely shot on film, Spearhead From Space.

Why should you revisit this story?  If you are a fan of Pertwee era Doctor Who, it’s a well written story with some fantastic action, awesome location shooting, and great performances, plus it’s finally in freaking colour!  But because of a disappointing lack of significant extras, I can only give Doctor Who: The Mind of Evil Three deadly hallucinations out of Five.