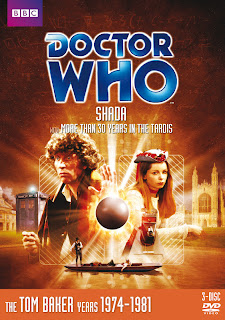 The Doctor (Tom Baker), Romana (Lalla Ward), and K-9 arrive at St. Cedds college in Cambridge to help an old friend, the retired Time Lord, Professor Chronotis find an ancient Gallifreyan artefact.  Skagra, an insignificant intergalactic mad scientist, is also after the artefact, an item that could unlock the secrets of Shada, the lost prison planet of the Time Lords, and if he succeeds, it could mean certain doom for all of Lifekind!

This is the DVD release of the unfinished, unbroadcast fourth Doctor story that fell victim to the insanely powerful trade unions that basically ran the U.K. with an iron fist in the 1960's, 70's and 80's.  In those days the unions would strike at the drop of a hat, basically whenever they felt like it, and for very little rhyme or reason, and it was one of these strikes that killed Shada.

I first saw this story in all it’s reconstructed glory back in the early 1990's when it was released on VHS, and to be perfectly honest I remember very little of it, besides it taking place in a college, and Tom and Lalla punting down a canal.  The latter I probably only remember because of its inclusion in the 20th anniversary story The Five Doctors.  So one might say I went in with “fresh eyes” so to speak, and I have to say I really enjoyed it.  I wish it had been completed so I could watch it in its entirety.  The location work is brilliant and the story is clever and quirky, everything you could want from a Douglas Adams Doctor Who tale.  The DVD version is basically the same as the VHS release, but with the benefit of digitally re-mastered picture and sound.
Shada was the last Doctor Who story penned by the brilliant Douglas Adams, who was also serving as script editor at the time.  What can one say about the genius that brought us The Hitch-Hiker’s Guide to the Galaxy, that hasn’t already been said?  I mean who else but Douglas Adams would have come up with the idea of an invisible spaceship landing in a park?!  A terrific gag that Leonard Nimoy would later steal when he made Star Trek IV: The Voyage Home.  What else can be said about Adams, except that he was a brilliant artist, taken from us far too early.

This three disc set includes a heap of extras including a making of doc, the 2003 BBCi/Big Finish animated web-cast version of Shada starring Paul McGann as the eighth Doctor, and Lalla Ward as Romana.  Also included is the 27min retrospective, Strike! Strike! Strike! that brilliantly encapsulates the nearly constant battle the programme was fighting with the uber powerful labour unions.  For anyone who doesn’t understand the damage that out of control labour unions can inflict on an industry, this documentary alone is worth the price of the DVD.  Having said that, if unions hadn’t shut down the production in 1970, then Spearhead From Space wouldn’t have been shot completely on film, on location, and wouldn’t look nearly as wonderfully cinematic as it does.  Additionally, the DVD set contains the 1993 anniversary documentary, More Than 30 Years in the Tardis, a lovely retrospective on the late Nicholas Courtney, the first part of an interview with the series’ first producer Verity Lambert, and much more.

Why should you revisit this story?  Well for one thing, you may not have seen it before, it’s written by Douglas Adams, it has an awesome slate of extras, and did I mention Douglas Adams?  For these reasons, Shada, gets FOUR invisible space ships out of FIVE.