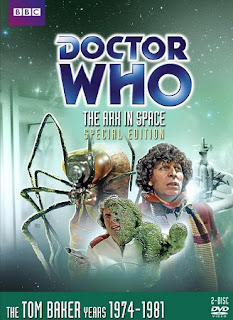 Doctor Who: The Ark In Space Special Edition Story #76

The Ark In Space is another recent release from the Classic Doctor Who series DVD range.   The slow burn, sci-fi/horror tale by the late, great Robert Holmes finds The Doctor, (Tom Baker), Sarah (Elisabeth Sladen), and Harry (Ian Marter) arriving on Space Station Nerva several thousands of years in the future.  While The Doctor and Harry explore the seemingly deserted station, Sarah is taken away by forces unknown and placed in suspended animation.  As Harry desperately searches for a resuscitation unit for Sarah, he instead stumbles upon the horrifying remains of a giant, mummified, alien insect.

I first discovered Doctor Who back in 1983 or so when the local PBS station began broadcasting the programme daily at 18:30, with a feature length “omnibus” edition on Saturday night.  I can’t say if this story scared me, but it certainly left an impression.  I recall an underlying feeling of dread creeping into my guts as the story unfolded, and I felt genuinely concerned for the characters as the true horror of their predicament became clear.

Kudos to Robert Holmes for crafting a truly terrifying tale that is essentially Ridley Scott’s Alien on a miserly BBC Television budget, a good four years before Alien would hit the big screen.  Holmes is distinguished by being not only one of the best over all writers of the Classic Who era, but also the most prolific, having written a total of sixty-four episodes of the programme, including fan favourites, The Talons of Weng-Chiang, and The Caves of Androzani.  Two stories that are so good, they almost make one forget his first commission for the series was The Krotons!


This story also represents a departure for the show, as it leaves behind the Earth-centric U.N.I.T stories of the Jon Pertwee years, and introduces darker, horror elements into the series that would become something of a staple of the Classic programme, and continue to be used in New Series episodes like Blink, and Silence in the Library/Forest of the Dead.

Once again the video quality is amazing for a programme first broadcast over thirty-five years ago, thanks to the hard work of the Doctor Who Restoration Team.  The audio is the original mono, completely digitally re-mastered by Mark Ayres to remove all hiss, pops, and audio drop-outs, leaving dialogue crisp, and sound effects and music clear.

Extras include an audio commentary recorded for the original 2002 DVD release with Tom Baker, Elisabeth Sladen, and producer Philip Hinchcliffe, a 30min “Making Of” doc, optional CGI effects, the 70min “TV Movie” version, and much more.

Why should you revisit this story?  Come on!  It’s basically a less expensive, brighter lit version of Alien, before Alien WAS Alien, only without all the blood and swear words!  And it’s written by one of the best writers in the history of Doctor Who: Robert Holmes!  Rent it, borrow it, or buy it, but definitely watch it when you have a chance.

Doctor Who: The Ark In Space Special Edition gets FOUR mummified space wasps out of FIVE.