Doctor Who: Spearhead From Space Story No. 51
On blu-ray 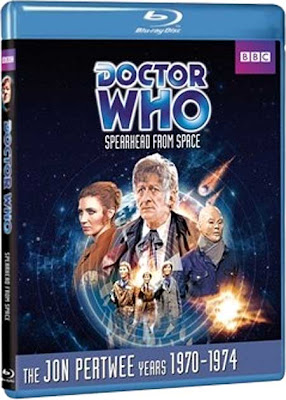 The Doctor (Jon Pertwee), forced by the Time Lords to regenerate, finds himself stranded on Earth, and just in time to thwart an alien invasion force that arrived in a shower of strange meteorites.

For the first time in the history of the classic Doctor Who home video range, Jon Pertwee’s first story as The Doctor is available in stunning 1080p High Definition on blu-ray.  But how can this be?  Wasn’t Classic Doctor Who shot on videotape?  And if that is the case how can you get a true HD transfer from video tape that is only capable of a finite number of lines of resolution that are nowhere near 1080?  Well, because once again in 1969 when the story was shot, the BBC was suffering through yet another strike by greedy, super powerful labour unions, so that forced the production to “think on its toes” as it were.  The result was the only story in the history of the programme to be shot entirely on 16mm film and completely on location.  What we end up with is a more “rich” looking story with fantastic locations and set-pieces that makes one wish the beeb could have just told the unions to fuck off, giving them the chance to carry on shooting the programme in this manner for the duration.

I’m going to lay it all out here; I was never really a fan of the Third Doctor, or the Pertwee years as a whole when I first saw them.  Seriously.  I know, what the hell was wrong with me right?  Allow me to explain…

When I first saw Doctor Who on PBS in the early ‘80s it was all Tom Baker, all the time.  The only other Doctors I had seen were brief glimpses of Pertwee in the opening seconds of Robot, and Peter Davison in the closing seconds of Logopolis.  I think they must have re-ran Tom’s seven series run at least four or five times over.  Over in the UK, British Who fans were enjoying Peter Davison as Doctor 5, and every time we would get close to the end of Series 18, my friends and I would get excited thinking that finally we would get to see the “new” Doctor Who.  Then, when PBS during one of their many pledge drives, finally announced they would be showing “new” Doctor Who very soon, my friends and I were excited beyond sense.  These of course were they days before the internet when the only info we could get on current Who was the occasional article in Starlog Magazine!  Imagine if you can, my disappointment when after watching episode four of Logopolis for the umpteenth time I tuned in the next evening at 18:30, expecting episode one of Castrovalva only to see… Spearhead From Space?  WTF?  This was not the first part of the first story of the fifth Doctor!  The first story of the man who would later become my Doctor, Peter Davison!  This was not what I was looking forward to at all.

So I tuned in to the Pertwee episodes on and off, day after day, week after week hoping that the Doctor 5 stories would be shown, only to find more lisping, karate chopping Pertwee drudgery.  Eventually PBS got round to broadcasting the Fifth Doctor episodes of course, indeed they would within a few years they would finally purchase the rights to broadcast ALL of the existing stories from An Unearthly Child, all the way up to the programme’s final story, 1989’s Survival, but it always kind of stuck in my craw that I had to wait almost another year or so to see the stories I was so looking forward to.

Fast forward to 2010.  I’m at a party talking to a buddy about Doctor Who and he tells me that Pertwee is his ALL TIME FAVOURITE Doctor.  Period.  Bar none.  I should totally give the Pertwee years another chance he said.  They were trying to do so much more in the ‘70’s with Doctor Who he said, the show was in colour for the first time, and they were making the character more of an action hero for the new decade.  He LOVED the Third Doctor.  Still does.  Now this is a man who has an opinion I have a great deal of respect for, so it kind of floored me that he was so passionate about Jon Pertwee’s Doctor.  I shook my head stating my usual arguments against Doctor 3, like the overlong stories, and the over-reliance on The Master as a villain, and he suggested to me that I re-visit some of the Pertwee era stories and give them another chance.  I left the conversation giving a mealy-mouth “maybe” and thought for a while during and after the party about what he had said.

Then in 2011, I picked up the DVD of Day of the Daleks, watching both the original, and Special Edition versions of the story back to back.  Holy crap!  Had I been wrong all this time about the Pertwee era?  This story rocked, and the changes made for the Special Edition made a great story awesome!  To this day it remains one of my all time favourite Doctor Who stories.  Since then I have made it my business to re-visit every Pertwee story from start to finish, and while there certainly are a few clunkers in there, (Colony in Space anyone?) as a whole I have found a new appreciation for the era, heck I even like, no scratch that, LOVE Invasion of the Dinosaurs.  That’s right, dodgy hand-puppet dinos and all.

Doctor Who: Spearhead From Space on blu-ray is presented in 1080p and mastered in High Definition at 2K from the original 16mm negative film elements and inter-positive prints and the results are freaking stunning.   Fine detail is amazing, colour pops like it never has before, blacks are not as inky as I would like, but are most defiantly an improvement over the original 2001 DVD release I already own.  Sound is re-mastered in DTS-MA 2.0 and sounds crisp, and clean, and without hiss or other distractions.

Special Features include, A Dandy and a Clown, a lovely 42min documentary on the life and career of Jon Pertwee, an absolute must for Third Doctor fans, Carry On: The Life of Caroline John, a 29minute tribute to the actress that played Dr. Liz Shaw during the seventh series of the programme.  There are also 22mins of title sequence material and an all too short 2min restoration comparison doc.

So while Jon Pertwee hasn’t knocked Davison off the top position as my all time favourite Doctor, he has certainly moved up the list.  Doctor Who: Spearhead From Space on blu-ray gets FIVE alien meteors out of FIVE.