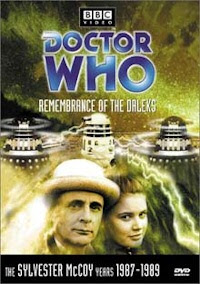 Doctor Who: Remembrance of the Daleks Story No. 152
Written By Ben Aaronovitch
Directed by Andrew Morgan

“Ace!  Give me some of that nitro-9 you’re not carrying!”

Earth, London, 1963.  The Doctor and his granddaughter Susan kidnap two teachers from Coal Hill School when they discover his TARDIS in an abandoned junkyard.  That same year, The Doctor (Sylvester McCoy), and his latest companion, Ace (Sophie Aldred) return to Totters Lane to take care of some unfinished business.  The Doctor’s deadliest enemy, the Daleks have returned as well, searching for ancient Time Lord tech that The Doctor himself left behind.  Technology that the Doctor doesn’t want them to have, technology that could make the Daleks the most powerful destructive force in the universe.

The twenty-fifth series of Doctor Who starts with a bang with Ben Aaronovitch’s Remembrance of the Daleks, arguably the strongest story of the programmes anniversary year.  Strong performances by McCoy, and Aldred who in only their second adventure together on screen already show a tremendous chemistry with each other that only gets better as the series progresses.  Stellar performances by the supporting cast, especially the trio of Group Captain Gilmore (Simon Williams), Dr. Rachel Jensen (Pamela Salem), and Allison (Karen Gledhill) who would go on to reprise their characters in the Counter-Measures series of audio dramas by Big Finish.

Aaronovitch has crafted a story that not only highlights all that is good about Who in the ‘80s, but also a tale that pays proper homage to the roots of the programme.  Something that quite frankly doesn’t happen nearly enough since the series revival in 2005.

Sci-Fi in general works best when it takes contemporary issues and lays them bare in the guise of speculative fiction.  Aaronovitch’s Remembrance of the Daleks takes a very important issue, that of racism, and gives us a fantastic, action packed, character driven tale that is so good it almost makes one forget how poor series twenty-four was!

Since the story’s initial DVD release, Remembrance is so far the only McCoy era story to receive a feature laden “Special Edition” release which I’m sure is awesome, however this review is of the original 2001 release so the special features are minimal, but include an amusing audio commentary with actors Sylvester McCoy, and Sophie Aldred, Deleted Scenes and Out-Takes, Multi-Angle Scenes, Pop-Up production notes, a Music only option, as well as the usual BBC trailers.

Why should you revisit this story?  Because it’s a cracking good Dalek story, it has some great performances, and some social commentary thrown in to boot.  Oh yeah, and the Daleks finally solve their problem with stairs…

Doctor Who: Remembrance of the Daleks gets FIVE hovering Daleks out of FIVE.