Doctor Who: An Unearthly Child Story No. 1
Directed By Waris Hussein

“I feel frightened, as if we were about to interfere in something that was best left alone…” 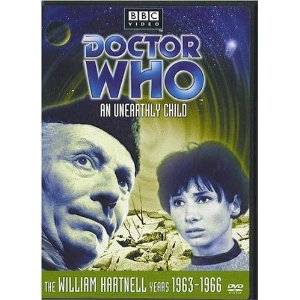 Doctor Who first came to me back in 1983 or 1984 when a guy from school who’s name is lost in the grey mists of time, told me about “this cool British show on PBS” that I “had to see.”  That very night I switched on the local PBS station at 18:30 and watched Part One of the Tom Baker era story, The Sontaran Experiment, and from the opening credits was hooked, and have been enjoying the programme ever since.

2013 is the 50th Anniversary of Doctor Who, the worlds longest running science fiction television series, so it seemed like a good a time as any to pound out some Doctor Who DVD reviews.  And where better to start than the very beginning, Story No. 1, An Unearthly Child.

Coal Hill School teachers Ian Chesterton (William Russell) and Barbara Wright (Jacqueline Hill) have a mystery on their hands: a strange transfer student, Susan Foreman (Carole Ann Ford) seems to be far too intelligent for her age, knowing too much about science and history, and possibly even the future.  The mystery deepens when the teachers follow Susan home one night only to find a deserted junk-yard, a police box, and Susan’s grandfather, an odd old man calling himself The Doctor (William Hartnell).  Before the night is over, Ian and Barbara will find themselves hurtling through time and space, to the beginnings of mankind, to the end of the universe and beyond…

Despite its extremely strong first episode, the remainder of the story set on prehistoric Earth seems quite pedestrian by comparison, nevertheless it remains one of my top ten favourite Doctor Who stories, perhaps getting extra points for being “the original you might say.”

The beauty of Doctor Who from its inception has always been the brilliance of its main story telling device, the TARDIS (Time And Relative Dimension In Space), the greatest ship in the universe, capable of travelling anywhere in time and space.  This of course opens up story possibilities, and may very well be one of the main reasons for the show’s longevity.  When all of time and space is your canvas, there are no limits to the stories that can be told.

An Unearthly Child was released for the first time on DVD in 2006 as part of The Beginnings Box Set which also included Story No. 2: The Daleks, and Story No. 3: The Edge of Destruction.  The box set also contains a good deal of extras including but not limited to audio commentaries,  the original unaired “pilot”, a 30-minute condensed version of the lost 7 part story Marco Polo, and the absolutely fantastic 54-minute documentary Doctor Who: Origins.  The doc is a no holds barred look at the series from its creation by Canadian Sydney Newman, and the constant battles he had with the BBC old guard over budget, and pretty much everything else.  It makes one wonder how the show ever got off the ground considering just how much the stuffy BBC brass at the time were at best unsupportive of the programme, at worst actively sabotaging the production of the show at every turn.

The video quality is actually quite good thanks to the re-mastering work done by the Doctor Who Restoration Team, in fact it probably looks better than it did in November 1963 when it was first broadcast.  The audio is re-mastered to Dolby Digital 2.0 and sounds awesome considering the source material.

A decent story, and a wealth of extras Doctor Who: An Unearthly Child gets 3.5 crotchety old Time Lords out of 5.