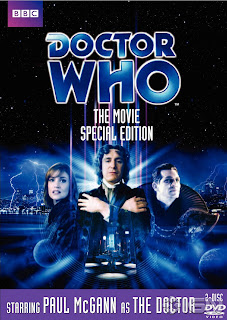 San Francisco, 1999 the newly regenerated Doctor (Paul McGann) squares off against his deadliest enemy, renegade Time Lord The Master (Eric Roberts).  But this time it’s not just The Doctor’s lives that are at stake, because if The Master succeeds in his dastardly plan, the entire universe faces total obliteration.

I know it can be difficult for fans of NewWho to remember, but there was a time when Doctor Who wasn’t on the air, and there was serious doubt as to whether it would ever return to the small screen.  After the programme’s rather mealy mouthed cancellation in 1989, (the suits never really had the balls to come out and say it was cancelled for a long time, stringing along the actors, and writers for months) Doctor Who entered what fans now call “The Wilderness Years,” the period of time between 1989 and 2005 when no new Who was broadcast.  Well, except for one night…  I remember being so excited at the news of new Doctor Who back in 1996, I of course made a VHS copy of the flick  that I watched so many times afterwards that I very nearly wore it out!

On the 14th of May 1996, Fox transmitted the Doctor Who TV Movie.  This 90 minute flick was supposed to be a “back door pilot” to jumpstart a new television series to be produced by the BBC and Universal to be shot in Vancouver and broadcast in both North America and the UK.  This of course did not happen, because to spite huge ratings in the UK and Canada, the flick only received mediocre ratings in the United States, so the “brilliant minds” at Fox decided not to pick up their option for a series.  It’s probably a good thing Fox never went to series anyways because as every fanboy and fangirl knows, Fox has no freaking idea how to treat it’s sci-fi drama programmes. They probably would have broadcast the show out of order, moved it around the schedule without warning, then cancelled it after 13 episodes or so after blaming the fans for its low ratings.  Bit of a shame really because Paul McGann absolutely crushes it.  He IS The Doctor.  (…and I)

Now for the Good.  The TARDIS interior sets are nothing short of breathtaking, from the Victorian splendor of the main console room, to the gothic wonder of the cloister room.  There was no skimping here, these are not the wobbly sets of your father’s Doctor Who.  The TV movie is also helped along by being shot on film, which ALWAYS looks better than videotape, and being shot in various locations in and around the beautiful city of Vancouver.  The story itself is fast paced, and action packed, showing the viewer what Doctor Who could be with a decent budget, and beautiful production values.  In fact the new series owes quite a bit more to this one-off production than it does to the original 1963-1989 series.

The missteps.  The elephant in the room: The Doctor claims to be half-human.  This is actually a hold over from the original concept that was brought forward when the idea of a complete reboot of the series was being pitched to Steven Spielberg and Amblin Entertainment.  The concept, which is detailed in the fantastic documentary The Seven Year Itch, had the half-Human Doctor leaving Gallifrey for the first time in search of his father, who had disappeared somewhere in space and time.  To be honest I just ignore the lines that reference it, and my fanboy life is all the better for it.  Also, it’s never explained how The Master gains entry to the TARDIS without a key, neither is it explained how he got his crazy powers.  It would have been nice if the writers could have somehow explained how The Master could suddenly turn into a weird, slimy space snake that spits paralysing venomous slime.  I know that Terrance Dicks attempted to explain what happened in his novel “The Eight Doctors,” but come on, nobody should have to read a sequel book just to understand what the hell was happening in something they just watched!

The extras on this two-disc Special Edition DVD are many and include two commentaries one with director Geoffrey Sax, and a fantastic one with Paul McGann, Sylvester McCoy, and moderated by Nicholas Briggs.  This commentary is hilarious and if you only listen to one, make it this one.  It also includes the awesome 54minute documentary The Seven Year Itch that finally tells fans what the hell was going on with their favourite series in the years it was off the air, and tells in great detail how the TV movie came to be.  The second disc includes a heap of EPK style making of docs, the second part of the Who Peter documentary series on the relationship of Blue Peter with Doctor Who, The Wilderness Years is a 23minute documentary on how Who was kept alive between 1989-1996, one of my favourite documentary series Stripped For Action tells the story of the Eighth Doctor comic strips, Tomorrow’s Times a doc about contemporary press coverage, the regular BBC trailers and PDF materials, and much more.

Picture is about as good as you can get without a complete 4k rescan and a blu-ray release, which I doubt we will ever get, and the audio is a decent 2.0 channel Dolby Digital presentation that won’t blow up you sound system, but is as clean and crisp as you could want it.

Why should you revisit this material?  Because it’s Paul McGann’s only televised story, and he is brilliant.  Oh, and come on who doesn’t love watching Eric Roberts absolutely devour the scenery as The Master?!

Doctor Who: The Television Movie gets THREE beryllium atomic clocks, out of FIVE.