Invasion of the Dinosaurs Story No. 71 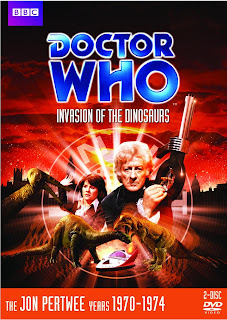 
“Well, that’s absolutely marvellous Brigadier.  Now what are you doing about the REAL problem?”

The Doctor (Jon Pertwee) and Sarah Jane Smith (Elisabeth Sladen) arrive in swinging London in the 1970’s to find the city evacuated due they sudden and mysterious appearance of freaking dinosaurs!  As it happens, the dinosaurs are being brought to the “present” by a mad scientist using a Time Scoop™ in some bizarre left-wing intellectual elitist plot to roll back time, transporting London back to a pre-industrial “utopia” for the elitists and their government crony buddies to live happily ever after in.  Yeah.  Well, with 231 stories and 790 episodes (at the time of writing),they can’t all be winners!

Invasion of the Dinosaurs is one of those stories that people who don’t like Doctor Who point to when asked why they don’t like the programme.  And with all its shaky cardboard sets and dodgy puppet dinos can we really blame them?  I mean I am not exaggerating at all when I say there are moments in the story where the set walls literally wobble!  And then of course there are the Dinosaurs… they are bad, bad, BAD!  You just won’t believe how vastly, hugely, mind-bogglingly bad the dino FX are, I mean you might think that Plan 9 From Outer Space has some dodgy FX, but that’s just peanuts to Invasion of the Dinosaurs…etc…etc… get the picture?  Good, then we needn’t speak of it again!

Apart from a story which is sometimes as dodgy as the rubber dinosaurs (oops!  I spoke of it again!), it is actually quite compelling to watch the Doctor and Sarah slowly puzzle out the mystery of what’s really going on.  The story is also filled with some great location shooting, and of course, the usual wonderful performances from Jon Pertwee, Lis Sladen, and Nicolas Courtney as Brigadier Lethbridge Stuart, all of them sadly, gone from this world but not forgotten.

The video for episodes 2-6 is terrific, showing off the tremendous efforts of the Doctor Who Restoration Team, and I can’t imagine this story looking any better than it does.  Episode 1 only exists in black and white 16mm film due to the BBC’s violently destructive practice of destroying their own programmes.  In fact Invasion of the Dinosaurs was scheduled for destruction a mere six months after it’s first broadcast.  The BBC exterminators managed to destroy the PAL colour masters of the first episode, but were stopped before the rest of the story could be wiped.  So only episodes 2-6 exist in their original PAL colour masters.  In 2010’s release of Planet of the Daleks, the black and white episodes were able to be totally restored because the missing colour information was recorded inadvertently on the black and white telerecordings as a series of chroma-dots.  This was not possible with Invasion of the Dinosaurs since the colour information was incomplete on the telerecording.  However a colour version of episode 1 is available on the DVD through seamless branching, but the results are very poor quality compared to the rest of the story, so I would suggest skipping it and just watching the default black and white episode.  The audio is the original mono and sounds fantastic with crisp dialogue, and no hiss, or drop-outs.

So even with a dodgy story written by an admitted communist, and some equally dodgy FX, Invasion of the Dinosaurs is still a fun, entertaining tale and gets 3 rubber dinos out of 5.