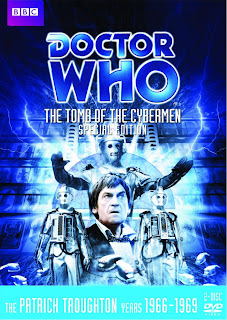 The Tomb of the Cybermen Special Edition Story 37

"Our lives are different to anybody else's.  That's the exciting thing.  Nobody in the universe can do what we're doing."

In the 1970’s, short sighted, left wing bureaucrats at the BBC decided it was a better idea to destroy art rather than retain it for posterity.  Thus began the systematic wiping, and burning of a massive number of 1960’s era Doctor Who stories.  Subsequently, the tireless efforts by Ian Levine and others have managed to recover a number of stories thought lost forever.  At this time 106 episodes of the series are still missing and presumed destroyed.  One of the stories believed lost forever by this indiscriminate, destructive rampage was story 37, The Tomb of the Cybermen.  Fast forward to 1991 when all four parts of the story on 16mm film were found in Hong Kong and returned to the BBC.

The Doctor (Patrick Troughton), Jamie (Frazer Hines), and new companion Victoria (Deborah Watling), land on the planet Telos, homeworld of the Cybermen, just as an expedition from Earth uncovers the entrance to an ancient control centre, leading to a frozen tomb.  Ignoring The Doctor’s warnings, the archaeological party enters the ancient tomb, springing a trap set by the Cybermen and awakening them from their 500-year slumber…

To say Tomb is the best story from the Troughton era (1966-1969) is a bit of a no-brainer, and not just because 15 of 21 stories that exist from his tenure are missing some or all of their episodes.  Certainly when compared to duds like The Krotons, and The Dominators, Tomb comes out on top every time.  But considering the brilliant work being done these days in restoring missing episodes with animation and existing audio recordings, like The Invasion, and The Reign of Terror for example, who knows?  Maybe someday we’ll have more than just six stories to compare to.

I’ve never liked the description “cosmic hobo” when describing Patrick Troughton’s Doctor.  To me that evokes an image of someone who does nothing, and lives off the taxpayer, complaining about how bad “the Man is keeping him down.”  Instead I think of him more as the “Lonely Traveller” who uses humour to mask his keen intellect, and the darkness that simmers just below the surface.  In this way there are certainly similarities between Troughton’s performance as The Doctor, and David Tennant’s interpretation some 37 years later.  Troughton was unique in having the opportunity to reinvent the character for the first time.  Instead of William Hartnell's interpretation as the grumpy old man who was more than happy to let both friends and enemies know he was the most intelligent being in the room, Troughton’s Doctor was content to allow his enemies to think him a fool, to allow them to underestimate him before turning the tables on them.  He could be silly and harmless one second, deadly serious the next, much to the chagrin of his enemies, who often found out too late just who they were dealing with.

The story features strong performances by Troughton, Hines, and Watling as well as the supporting cast, especially Shirley Cooklin as Kaftan, and  Michael Kilgarriff who’s mere physical presence  as The CyberController is a sight to behold.

Tomb is not without a sort of naïve charm as well, considering what most people know of modern archaeology, some of the character’s actions will evoke a slight chuckle, number one being the way these alleged “scientists” from the far future decide the best way to uncover the entrance to an ancient tomb is through the use of a MASSIVE amount of explosives!  Then once inside, they flit about for fifteen minutes taking notes before declaring they have all the information they need.

The picture quality looks fantastic, possibly better than it did when first broadcast thanks to the tireless work of the Doctor Who RestorationTeam and their latest VidFire processes.  The sound is very good as well, dialog is clear, and sound effects and music are fantastic for a 44 year-old programme recorded in mono.

The 2 disc set’s extras impress as well, and feature two commentary tracks as well as a documentary on the history of the Cybermen, and a terrific making of documentary and much more.

The combination of one of the best Doctor who stories of all time, along with terrific picture and sound, and a fabulous suite of extras get Doctor Who The Tomb of the Cybermen Special Edition FIVE Cybermats out of FIVE!