The Road To Hell Is Paved With… 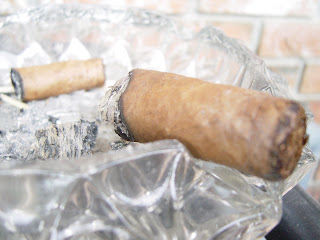 Calgary City Council decided to turn the screws on smokers a little more this week by making their already insane anti-smoker by-laws even more draconian.  Ward 10 Alderman Andre Chabot is pushing to ban all tobacco products near parks, sports fields, and pretty much everywhere that “youth may congregate.”  This is some delightfully vague wording that could literally mean anywhere.  I’ve personally seen youth congregating in all sorts of places including public sidewalks, parking lots, dog parks, in front of the local convenience store, pretty much everywhere.  Even if this is not the intent of Alderman Chabot’s amendment, anyone with half a brain can see what road this is heading down.  The anti-smoker lobby has apparently been pushing the city to intensify its war on smokers for some time now and this is only the next step towards total prohibition of tobacco and tobacco products in Calgary.

It’s certainly curious that when things are going okay, i.e.: when there are no real problems to worry about, these neo-abolitionist organizations seem to come out of the woodwork, and intensify their “anti-sin” agendas.  Or maybe it’s not curious at all.  I suppose these people have nothing better to do when times are good than to stick their noses into the private, completely legal, business of private citizens.  It reminds me of a quote attributed to German Pastor Martin Niemoller from the 1930’s.

Now before everyone gets his or her knickers in a twist, it’s an analogy!  Clearly I’m not saying the extremely well funded anti-smoker lobby, and their friends the Mayor and Calgary City Council are National Socialists who are marching smokers to their deaths!  Clearly this is NOT the case, but it doesn’t make the analogy any less valid.

What people don’t remember is where this all started.  Back in 2002 the City of Calgary rammed through a by-law making it illegal to smoke on the outdoor patio of a restaurant or bar, thus pushing their own left wing, anti-freedom of choice, anti-smoker agenda on private business for the first time, and starting a dangerous precedent.  I thought this absurd at the time.  Why stop people from smoking outside?  Some of the mealy-mouthed excuses for banning smoking on pub patios had to do with the idea that “children” walking by might see someone on the patio smoking and suddenly be unable to control their urges to walk into a 7-11 and buy a pack of smokes.  Even though it has been illegal for anyone under the age of 18 to buy tobacco products for years.  Then a year later, after all the smokers had been driven inside by the anti-smoker by-law, the city made it illegal to smoke inside a restaurant or bar, this time citing workplace employee health as the reason.  Very crafty of them actually because who can argue that the health of servers and bartenders isn’t important?

People who know me know that although I am not a cigarette smoker, I do on occasion enjoy a fine cigar in the relative privacy of my own back garden.  I say “relative” because I live in a small, semi-detached townhouse/condo with a four-foot fence, that’s less than fifteen meters from a City of Calgary off-leash park.  One of many, many, many places “youth might congregate.”  If this new proposal is added to the already brutal anti-smoker by-laws, and is allowed to get an “easy ride through council” as Alderman Chabot says it will I might very well lose my right to enjoy an occasional fine cigar on my own private property.

What’s next I wonder?  I suppose the anti-drinker lobby could make a similar argument to the one the anti-smoker lobby made and have the Council ban the legal consumption of alcoholic beverages by persons over the age of 18 on a restaurant or pub patio, because of the off chance that a child might witness the activity!  Said child would of course be scared for life, then not be able to control his, or herself head straight to the closest liquor store only to be kicked out immediately for being under age.  But I guess these neo-abolitionists never think of things like "legal age restrictions," instead thinking that any four year old can just walk into a bar, light up a fag and order a shot of Jack Daniels.  Will somebody please think about the poor, defenceless children!  If "the kids" are the only reason nonsense like this gets pushed through Council, then why not just enforce laws already on the books, such as carding anyone who looks under 18?  I guess the Calgary City Council doesn’t think private business operators are smart enough to do that, which I suppose is why all tobacconists have to have the windows to their private businesses blacked out like a down-town row-house during the London Blitz.

I understand that some of you out there may not be smokers, but I cannot stress enough that the FREEDOM to take pleasure in a LEGAL PRODUCT like a cigar, cigarette, pipe, or chewing tobacco is in PERIL.  It can’t be put any simpler than that, and if we don’t speak out against this further attack on smokers, who then will be left to speak up when the Calgary City Council gets around to taking away something you really do care about?