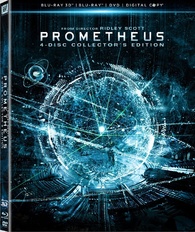 A prequel (YES it is! Stop arguing!) to the groundbreaking 1979 Sci-Fi Horror flick ALIEN?  Directed by the man himself, Ridley Scott?  Oh, I am SO in!

A lone white skinned, buff, mostly human looking alien “engineer” drinks some black alien goo and sacrifices himself, and in so doing seeds prehistoric earth with the DNA that turns out to be the building blocks of all life on earth.  Fast forward to our not so distant future of the late 2080’s where anthropologists Dr. Elizabeth Shaw (Noomi Rapace), and her partner Charlie Holloway (Logan Marshall-Green) discover pre-historic cave paintings that show what they believe to be an Ancient Astronaut pointing towards a distant star system in what they believe to be an invitation.  But who are thee Ancient Astronauts, and why did they leave these invitations?  Well if you’re looking for answers, you’ll have to look somewhere else because Prometheus provides none.  Well, that’s not entirely true, but don’t blame me if the answers the flick gives you are nothing but a colossal disappointment.

The Good.  The flick is shot with Red Epic Digital HD cameras and looks stunningly beautiful.  Of course it does, it’s a Ridley Scott flick ferchissakes and the 1080p AVC encoded transfer on the blu-ray is just about as close to flawless as makes no difference.  The DTS-MA 7.1 Surround is also reference quality and without a doubt one of the best sounding blus I’ve heard this year.  All in all the technical presentation of Prometheus is freaking excellent.  The 4-Disc Collector’s Edition Blu-ray contains heaps of special features including a selection of deleted scenes, 2 audio commentaries, a nearly 4 hour documentary on the making of Prometheus which honestly is better than the actual film if truth be told, and the Weyland Corp Archives that includes production galleries, featurettes and more.

The Bad.  I can’t find fault with either Charlize Theron, or Michael Fassbender’s performances, the rest of the cast however really don’t hold up their end, which is mostly the fault of the writers.  The film’s first act is actually not so bad either, it shows great promise actually, which makes it almost difficult to believe what the mediocre second act, and the profoundly disappointing third act brings us.  We have characters who previously acted with calm, logical, scientific detachment, and intelligence when dealing with the unknown situations before them, suddenly acting stupid, and irrationally, (Talking baby talk to and reaching out to pet a dangerous alien life form? Hunkering down to rest in the very room you FLED earlier because the situation seemed dangerous?  Really?) and seemingly trying very hard to get themselves killed, one even getting killed for no reason other than just so in the end we can have Noomi’s character basically repeat Sigourney Weaver’s line from the original ALIEN as the last survivor of the Prometheus!

How many years were filmgoers waiting for Ridley Scott to finally come back and direct another ALIEN film?  Oh yeah that’s right it was 33 fracking years, and what do we get for our patience?  A film that is only marginally (if that) better than the crappiest and most maligned flick in the franchise: ALIEN RESURRECTION, and a film nowhere near as good as the original ALIEN, a classic in its own right.  Was this Scott’s fault, maybe partially, but I place the blame for the most part on the writers John Spaihts, and Damon Lindelof, especially Lindelof who clearly didn’t want to make a Sci-Fi Horror flick, rather a pretentious pop-philosophical flick with a bunch of ham handed overtones of science vs. faith.  I can see what the writers were trying to do, which is just a nice way of saying the failed epically.

The Ugly.  The original ALIEN featured some of the most fantastic, original, and mind-blowing designs ever put on film courtesy of Swiss surrealist H.R. Giger.  One of these designs, besides the title creature itself, which sticks in my mind to this day, is the Space Jockey.  For those that don’t know, this was the giant, dead alien the crew of the Nostromo find in the pilot’s chair of the derelict spacecraft on LV-426.  I love this design even to this day.  I wanted to know where he came from, and what his story was.  My colossal disappointment comes at 00:46:35 Dr. Shaw says “It’s not an exoskeleton, it looks like a helmet.”  Sigh… the awesome, wicked-cool alien “Space Jockey” turns out to be just a suit, and a hat for a giant human… another epic fail if there ever was one.  I mean come on!  What a freaking let down.

Final Thoughts.  I really wanted to like this film, I really did.  Some of I liked a lot; the overall design aesthetic was solid, the way the flick is shot is gorgeous, but like I seem to say a helluva lot these days about films, design and effects a brilliant picture do not make, you need a solid story and believable characters and Prometheus has neither.