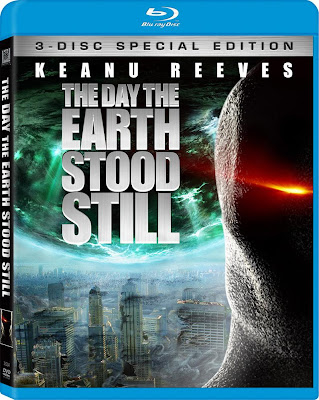 The Day the Earth Stood Still
Directed by Scott Derrickson

Scientist Dr. Helen Benson (Jennifer Connelly) finds herself face to face with the alien Al Gore, oops, I mean Klaatu (Keanu Reeves) who traveled across the galaxy to warn the Earth of a theoretical -errr- impending environmental crisis. The Government treats the extraterrestrial as hostile, and denies his request to address the United Nations, so Helen and her stepson Jacob go on the run with Al -errr- Klaatu to try and convince him that the filthy Human inhabitants of the Earth are smarter than they look and should survive, but perhaps it is already too late.

I really went into this flick with an open mind, having been a huge fan of the original 1951 flick (which is included in the Blu-ray release as a great little bonus!), but about half way through began to get the distinct impression that the flick should have been called An Inconvenient Truth 2: The Wrath of Gore(t)!

It’s almost sad when the best thing about a huge budget sci-fi film like this is a pair of cameos by John Cleese and James Hong. Jennifer Connelly is gorgeous of course, and I can’t think of a role more perfect for Keanu than the straight-faced, emotionless alien-in-a-human-body, character he plays, but for my money the story was weak and full of holes, and if the story isn’t there, the film cannot work.

It seems as if the screenwriter(s) took the bare bones of the original, classic, and wrote it around a couple of weak action and effects shots, put it in a cocktail shaker, dumped it out and hoped for the best. As a science-fiction geek, I may have been able to almost over-look this if the visual effects were awesome, but to be honest, they are little more than mediocre throughout. The GORT robot is especially bad and looks so much like a crappy CG effect in every scene that it is truly, annoyingly distracting.

On the plus side the movie arrives on Blu-ray with a FANTASTIC 1080p, 2.35:1-framed transfer that is truly reference quality. The AQ is equally impressive with a remarkable DTS-HD MA 5.1 lossless soundtrack that will give your home theater the workout it deserves… except that means you have to watch the movie, so it’s kind of a trade-off.

The Blu-ray also includes a really good supplements package that in many ways is superior to the movie itself, but your mileage may vary.

Even taking the good with the bad, I still cannot recommend this flick and give TWO Dyson Spheres out of FIVE.
at April 13, 2009